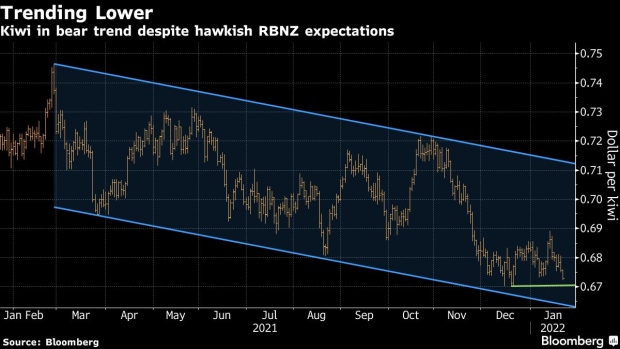 Pedestrians walk past cafes and restaurants in Auckland, New Zealand, on Sunday, Dec. 5, 2021. New Zealand’s largest city has exited lockdown, bringing relief to its residents but also signaling the likely spread of Covid-19 to the rest of the country. , Bloomberg

(Bloomberg) -- The New Zealand dollar is turning vulnerable to further declines despite expectations of aggressive policy tightening from the nation’s central bank this year.

That’s because the rates markets have fully priced in the bulk of the Reserve Bank of New Zealand’s rate hikes in 2022, leaving the kiwi susceptible to losses amid risks that the Federal Reserve’s policy tightening could turn even more hawkish.

“Any big shift in direction for the NZD is likely to come from the USD leg,” says Jason Wong, currency strategist at Bank of New Zealand in Wellington.

Rates markets are pricing 157 basis points of RBNZ hikes this year. New Zealand’s fourth-quarter inflation data due January 27 is likely to confirm this stance as it’s forecast to jump to 5.8% year-over-year, which would be the highest since 1990. In comparison, 99 basis points of Fed rate increases this year have been factored into markets.

However, investors could still be underpricing how much the U.S. central bank will tighten. The Bloomberg Economics rule, a modified version of the Taylor rule which captures key characteristics of the FOMC’s new policy approach, flags the risk of as many as six rate hikes this year amounting to 150 basis points in 2022.

The New Zealand dollar is hovering above support at last year’s low of 67.02 U.S. cents. A breach of these levels would open the door to further kiwi weakness.

Asset managers may be counting on that drop as they’ve turned bearish on the currency since late November. They held net short positions of 13,286 contracts as of January 18, according to Commodity Futures Trading Commission data.

Kiwi losses may be capped around 66 U.S. cents over the next month or two, according to Wong, as he sees limited upside for the greenback from current levels.