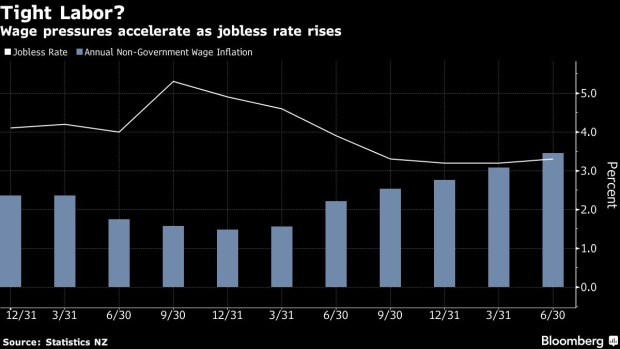 A report last week showed the jobless rate rose to 3.3% in the three months through June, wrongfooting economists who expected it to fall to a fresh record of 3.1% The cooling comes as the RBNZ has tightened policy by 2.25 percentage points since October and is expected to hike the Official Cash Rate by another half-point next week, taking it to a seven-year high of 3%.

The upward revisions by BNZ and Westpac bring them closer to the central bank’s forecasts. It projected in May that the jobless rate would climb to 3.5% by the end of 2022 and 4% by the middle of next year. The RBNZ’s updated outlook will be released with the rate decision on Aug. 17.

While unemployment has likely passed a trough, economists are sticking with their view that the RBNZ will remain hawkish as last week’s report also provided the latest salary data which showed soaring wage inflation.

“Wage inflation is and will remain above RBNZ forecasts for a while,” said Stephen Toplis, head of research at BNZ. “Wage pressure will continue to keep non-tradeables inflation elevated. But how long will that pressure last in the event the unemployment rate continues to move higher?”

Toplis sees the OCR reaching 3.5% by the end of this year, while Westpac predicts the key rate will be at 4% in the fourth quarter.

Economists highlighted that last week’s report showed the economy failed to add jobs for a third straight quarter. While that may be evidence the RBNZ’s rate hikes are working, it could also signal a lack of skills and the absence of a supply of migrant workers, according to Westpac.

“While there is a great deal of hiring going on, employers are tending to attract people from the existing pool of workers with no net growth in the number of jobs,” said Michael Gordon, acting chief economist at Westpac. “The New Zealand economy appears to be hitting the wall in terms of employment growth.”