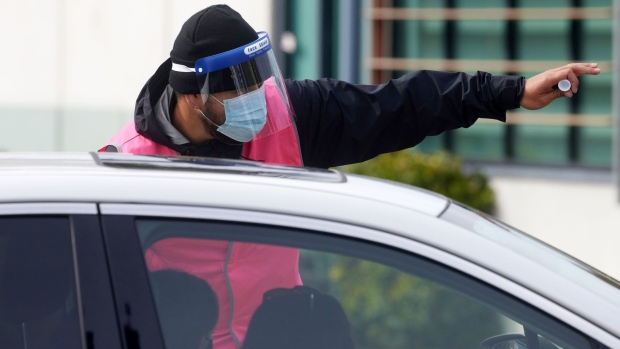 A traffic wardens directs members of the public waiting to enter a drive-thru Covid-19 Vaccination Centre set up at the Trust Stadium in Auckland, New Zealand, on Wednesday, Sept. 1, 2021. Delta is testing New Zealand's elimination strategy because it is so much more transmissible than the first iteration of the virus and has a shorter incubation period, giving contact tracers less time to find and isolate positive cases before they become infectious. , Bloomberg

(Bloomberg) -- New Zealand Prime Minister Jacinda Ardern extended a lockdown in Auckland for at least another two weeks, but said a vaccination target would be introduced on Friday to give people an indication of when restrictions could be eased.

Auckland will remain at Alert Level 3, meaning people cannot leave the city and should stay at home where possible, Ardern told a press conference Monday in Wellington. She said a vaccination target will provide the city, which has already been locked down for two months, a pathway out of restrictions.

“We need to keep going with both tools, restrictions and vaccinations, because with delta we cannot rely on just one,” Ardern said. “If we get this right, if we keep case numbers low while we vaccinate people, then it makes it easier for us to keep control of Covid while we ease restrictions in the future.”

Ardern has previously resisted introducing in a target -- a tool used in Australia to signal when restrictions will be eased -- but the government is coming under pressure to provide more certainty as Auckland’s outbreak drags on. While she refused to be drawn further on the target today, Ardern has indicated in the past that officials want to see a vaccination rate of over 90%.

“The target will be high, to give us the greatest confidence possible,” Ardern said. “We’ve looked closely at the evidence overseas. “We’ll be aligning our target with those countries that have managed the transition from restrictions to vaccination in the safest way possible.”

Once Covid-Free, New Zealand Prepares for 5,000 Cases a Week

Around 66% of the eligible population is fully vaccinated, while 85% has had at least one dose.

The Ministry of Health reported 60 new cases of Covid in the community today -- 57 in Auckland and three in the neighboring Waikato region, parts of which also remain in lockdown.

The government wants to “avoid a spike in case numbers and hospitalizations and protect vulnerable communities as much as possible in the coming weeks while we keep lifting vaccination numbers,” Ardern said.

Cabinet considered imposing even stricter Level 4 restrictions in Auckland as a “circuit breaker,” but decided against it after public health advice that it was unlikely to significantly reduce new infections, she said.

The Northland region will exit lockdown at midnight Tuesday, joining the rest of the country on Alert Level 2.