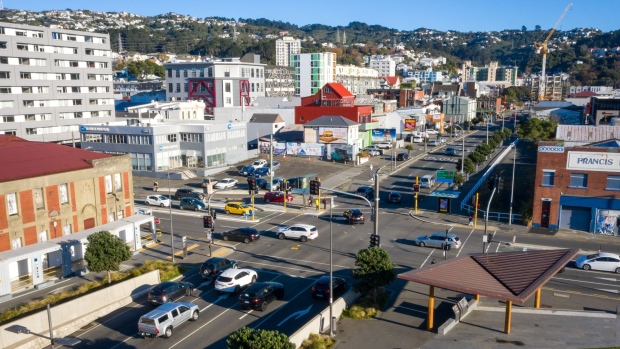 (Bloomberg) -- House prices in Australia and New Zealand are now lower than a year ago and likely to fall further as their central banks keep raising interest rates to try to gain control over inflation.

New Zealand home values suffered their biggest annual drop in more than 13 years in November, falling 2.9% from a year earlier, while Australia’s fell 3.2%, CoreLogic data showed Thursday. Annual house-price moves turned negative in both countries in October following monthly declines for most of this year.

Australia and New Zealand are experiencing a reversal of pandemic-era property booms, when rock-bottom mortgage rates fueled a buying frenzy. New Zealand prices in particular are expected to slide further after its Reserve Bank stepped up the pace of rate increases this month.

“As long as interest rates continue to increase, it’s likely housing values will continue to fall,” said CoreLogic New Zealand Head of Research Nick Goodall. “The question is at what point will the RBNZ become concerned enough about falling house prices and an upcoming recession, including job losses, to pull back in the inflation war.”

The RBNZ last week increased the Official Cash Rate by a record 75 basis points to 4.25% and projected the benchmark will need to reach 5.5% next year to return inflation to its 1-3% target. The bank forecasts a recession in 2023 as rising home-loan rates curb household spending.

“There’s a bit of a risk that the Reserve Bank could overshoot and that could really start to hurt,” said Zoe Wallis, chief economist at Deloitte New Zealand. “If you look at the percentage of disposable income that goes into servicing a new loan now it goes up to about 55% of your disposable income.”

New Zealand mortgage rates have more than doubled over the past 18 months, with most fixed rates now above 6% and expected to rise further. Goodall said some homeowners could face rolling onto an 8% interest rate next year.

In Australia, where the pace of housing declines has eased, the outlook for mortgagees is similarly tough: borrowing capacity has fallen and monthly repayments have surged. In addition, a large chunk of loans that were fixed at record-low rates during the pandemic are due to roll over in 2023 at a much higher rate.

With the full impact of past hikes yet to be felt, rates still rising and the economy set to weaken, there’s likely still some way to go before prices bottom, said Shane Oliver, chief economist at AMP Capital Markets in Sydney.

Given expectations that rates will rise higher in both countries, some economists see home values dropping more than 20% from their peaks.

In New Zealand’s capital, Wellington, prices have already fallen 15.9% from a year earlier, today’s CoreLogic data showed. In largest city Auckland, prices are down 3.1% on the year.

By comparison, Australia’s bellwether market of Sydney has dropped 10.6% from a year ago while Melbourne has declined 7%. From its peak in April 2022, the broader Australian market has lost 7% of its value.

“There will obviously be some who will be under pressure in this environment, so there will be some mortgage stress for some people, but we are not expecting that to be widespread,” Felicity Emmett, a senior economists at Australia & New Zealand Banking Group Ltd., told the Australian Securitisation Forum in Sydney on Thursday.

The RBA is widely expected to raise rates to 3.1% at Tuesday’s meeting, up from a record-low 0.1% in May when its tightening cycle began. While Australian policy makers have said further hikes are likely, unlike their New Zealand counterparts they have expressed a desire to engineer an economic soft landing.