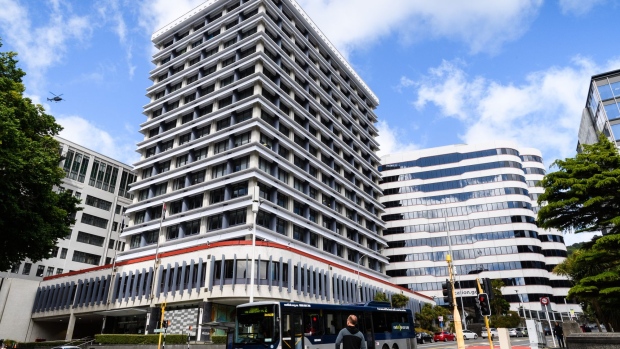 The Reserve Bank of New Zealand (RBNZ) building, center, in Wellington, New Zealand, on Saturday, Nov. 28, 2020. A housing frenzy at the bottom of the world is laying bare the perils of ultra-low interest rates. , Bloomberg

(Bloomberg) -- New Zealand inflation accelerated slightly in the first quarter, adding to signs the central bank may not need to cut interest rates any further.

The Reserve Bank projects inflation will temporarily accelerate into the top half of its 1-3% target range through 2021, before slowing next year. Earlier this month, the central bank said it would look through that spike in prices and wouldn’t remove stimulus until it was confident of achieving its inflation and employment objectives.

The New Zealand dollar was little changed after the report. It bought 71.73 U.S. cents at 10:59 a.m. in Wellington from 71.72 cents immediately before the release.

The quarterly gain in the consumers’ price index was led by higher prices for transport and housing, the statistics agency said.

(Updates with further details from report in fifth paragraph.)