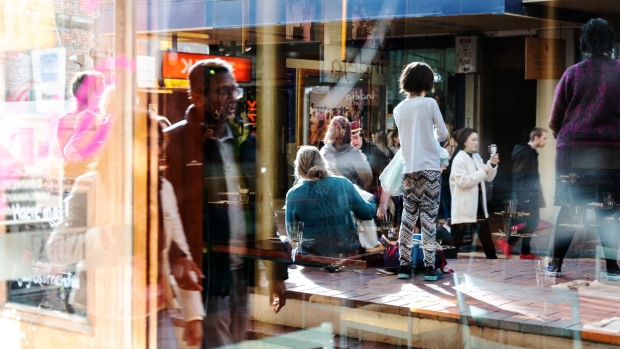 Pedestrians are reflected in a store window in Wellington, New Zealand, on Saturday, June 22, 2019. The out-of-favor kiwi dollar has tumbled about 3% this quarter as the Reserve Bank of New Zealand turned dovish and cut interest rates, the first central bank in the developed world to do so. Economic growth held at a five-year low in the three-months through March, leaving the door open for further easing. , Bloomberg

Annual inflation was 7.2%, unchanged from the third quarter, Statistics New Zealand said Wednesday in Wellington. Economists expected 7.1%, but the Reserve Bank was picking an acceleration to 7.5%. Consumer prices advanced 1.4% from three months earlier.

While inflation remains uncomfortably high for the RBNZ, the prospect of a recession and waning price pressures globally could prompt it to slow the pace of its monetary tightening. Investors are becoming less confident the bank will follow November’s 75 basis-point hike with another jumbo move at its Feb. 22 policy meeting, swaps data show.

The New Zealand dollar traded lower in the wake of the data. It bought 64.79 US cents at 12:30 p.m. in Wellington, down from 65 cents beforehand. Investors reduced bets on a 75-point rate increase next month, pricing a likelihood of around 30% from more than 50% yesterday.

She downgraded her forecast for the next rate increase to 50 points from 75, and lowered her expected peak in the Official Cash Rate to 5.25% from 5.75%.

The RBNZ in November projected that the OCR would need to rise to 5.5% by mid-year from 4.25% now in order to get inflation back into its 1-3% target band next year.

“We see the RBNZ raising rates by 50 basis points in February, lifting the OCR to a peak of 4.75%. The 4Q CPI data supports our view that the RBNZ is unlikely to deliver on its projections for aggressive tightening in 2023.”

New Zealand has been at the forefront of global monetary tightening as central banks battle to overcome inflation stoked by surging energy prices and supply chain disruptions.

The RBNZ has hiked the OCR by 4 percentage points since October 2021.

But weak business confidence, slow consumer spending and signs of waning global inflation pressures have fueled speculation the central bank may be able to join some of its peers in slowing the pace of rate hikes.

The RBNZ forecast inflation would be 7.5% in the first quarter of 2023 before starting to recede as the economy heads into recession. It doesn’t tip inflation to be less than 3% until the second half of 2024.

“The inflation outlook remains highly uncertain. Nevertheless, inflation is much too high and looks ingrained,” said Mark Smith, senior economist at ASB Bank in Auckland, who continues to expect a 75-point move in February. “Restrictive OCR settings and a clear RBNZ focus on delivering eventual sub-3% inflation outcomes is needed.”

Price rises were widespread, the statistics agency said, with 10 of the 11 main groups in the consumers price index basket increasing in the quarter. The main drivers were housing and household utilities, food and transport, it said.