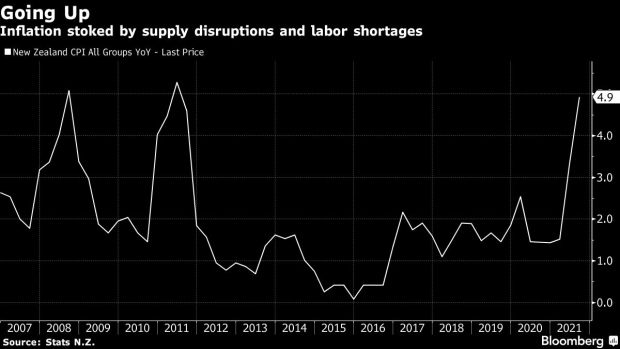 The Sky Tower, beyond yachts moored in a marina, in the central business district of Auckland, New Zealand, on Thursday, Sept. 16, 2021. New Zealand’s economy was expanding at more than twice the pace forecast by economists before a nationwide lockdown interrupted its momentum, latest data show. , Bloomberg

(Bloomberg) -- New Zealand inflation jumped more than expected in the third quarter to the fastest pace in 10 years, reinforcing bets that the central bank will keep raising interest rates and sending the currency higher.

The Reserve Bank, which seeks to keep inflation around the midpoint of a 1-3% target band, raised the official cash rate earlier this month and signaled more increases are coming as supply disruptions and a labor shortage stoke price pressures. At the same time, largest city Auckland has been in lockdown for two months as it battles a coronavirus outbreak, weighing on activity.

The New Zealand dollar rose after the report. It bought 70.82 U.S. cents at 10:51 a.m. in Wellington, up from 70.72 cents beforehand. Investors are now fully pricing in another quarter-point rate hike from the RBNZ on Nov. 24, up from around a 90% chance last week.

The annual inflation rate is the highest since 2011, when prices were boosted by an increase in the goods and services tax in late 2010.

Statistics New Zealand said the 2.2% quarterly gain was the biggest since the fourth quarter of 2010. If the quarters impacted by the GST increase were excluded, it was the biggest move since 1987, the agency said.

Price rises were widespread, with 10 of the 11 main groups in the consumers price index basket increasing in the quarter. The main drivers were housing-related costs, such as construction of new homes and local authority rates, the statistics agency said.