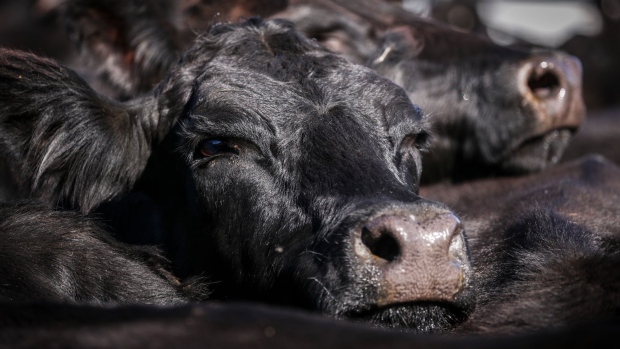 Cattle huddle at a farm in Gunnedah, New South Wales, Australia, on Friday, May 29, 2020. A growing number of Australia's primary producers are mulling the potential for a further tightening of restrictions on Australia's agricultural exports by China. Two thirds of Australia’s farm production is exported, with almost one third of this, 28%, going to China, including 18% of Australia's total beef production, according to Australia's National Farmers' Federation. Photographer: David Gray/Bloomberg , Bloomberg

“The deal will see only a small quota for New Zealand beef into the European Union -- 10,000 tons into a market that consumes 6.5 million tons of beef annually -- far less than the red meat sector’s expectations,” Sirma Karapeeva, chief executive of the Meat Industry Association, said in a statement Friday in Wellington. “We are extremely disappointed that this agreement does not deliver commercially meaningful access for our exporters, in particular for beef.”

Ardern announced the deal overnight from Brussels, where she and Trade Minister Damien O’Connor lobbied to get an agreement over the line four years after negotiations started. They hailed it as a major achievement that will unlock New Zealand access to one of the world’s biggest and most lucrative markets.

“It’s a strategically important and economically beneficial deal that comes at a crucial time in our export-led Covid-19 recovery,” Ardern said. “It delivers tangible gains for exporters into a restrictive agricultural market.”

It will secure duty-free access on 97% of New Zealand’s current exports to the EU, with over 91% being removed the day the FTA comes into force. Exporters will save approximately NZ$110 million per annum on tariff elimination.

The kiwifruit, wine, mānuka honey and seafood industries appear to be winners, with immediate tariff elimination for those goods.

“We’ve fought hard for our dairy and beef exporters and the deal could deliver up to NZ$600 million in additional export revenue if access is used and once the agreement is fully in effect,” O’Connor said. “We have also secured improved access for our butter and cheese producers, some of which will now be able to be trade with the EU for the first time in many years.”

However, the New Zealand Specialist Cheesemakers Association said the country “has bowed to EU pressure” and given way on key cheese names.

Of particular concern was the loss of the name Feta, which will be phased out over nine years, said board member Daniel Shields. Europe has also succeeded in including the right to restrict new names at a future date, he said.

It is unclear when the FTA will come into force. Both parties must complete domestic legal processes and ratify the agreement, which could take several years.