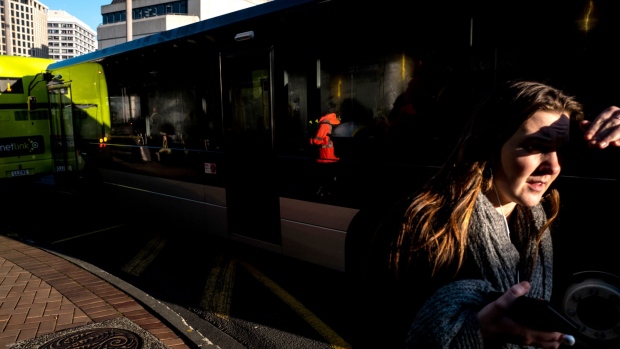 A woman waits at a bus stop in Wellington, New Zealand, on Wednesday, July 18, 2018. New Zealand inflation picked up in the second quarter amid higher fuel and construction costs while the impact from a weaker currency was less than expected. Photographer: Birgit Krippner/Bloomberg , Bloomberg

(Bloomberg) -- New Zealand is increasing investment in public transport for the nation’s biggest city, Auckland, after agreeing with the local council on a path ahead for major projects, Transport Minister Michael Wood said.

The government will spend an extra NZ$200 million ($128 million) on the Eastern Busway, raising its total investment to NZ$600 million, Wood said Saturday in Wellington. The busway provides dedicated lanes for non-stop buses from eastern suburbs connecting with train networks and extending into the central business district.

Auckland is grappling with clogged motorways and poor public transport that impacts the flow of freight and workers, particularly between large factories in the south and the port, which is in the heart of the city. The government is building an inner-city subway, and plans a light rail link to the south to get passenger cars off the road. It has also proposed relocating the Port of Auckland to alternative sites to improve freight flow and return valuable harbor-side land for future development.

“The government and council have committed to work together to advance our priorities, provide certainty and deliver progress for Auckland,” Mayor Wayne Brown said in a joint statement with Wood. “The Minister and I agree that it is important for there to be a focus on the immediate and pressing needs facing Auckland, including reducing congestion, establishing a clear plan and timeline for the future of Auckland’s publicly owned waterfront land, and fixing Auckland’s current public transport crisis.”

Council and government will work on “city shaping initiatives” such as a Northwestern busway, rail improvements and an alternative crossing for the Waitemata Harbour, Brown said.

“The agreed joined-up plan will require clear decisions and timelines to be made about the future use of Auckland’s publicly owned waterfront land, currently being used by Ports of Auckland,” he said.