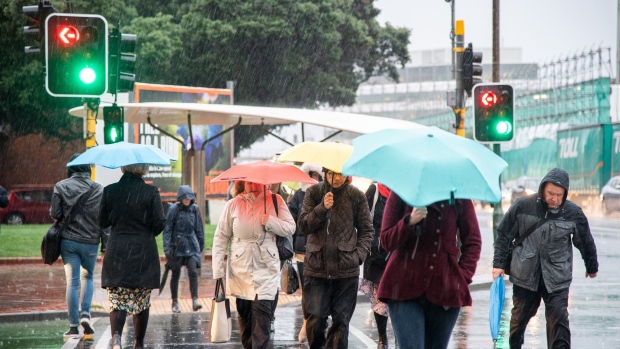 Pedestrians use umbrellas while walking along a sidewalk in Wellington, New Zealand, on Thursday, June 18, 2020. New Zealand entered recession for the first time in almost a decade as the coronavirus pandemic led to the nation’s biggest quarterly contraction in 29 years. Photographer: Mark Coote/Bloomberg , Bloomberg

“We will see it improve over the next couple of years,” Robertson said at the Bloomberg Address Thursday in Auckland. “I do think there’s been a drag on it over the last couple of years with Covid.”

Improving labor productivity, which measures how efficiently a country turns resources into goods and services, is considered crucial to lifting incomes and living standards. When in opposition, Robertson held the then government to account over New Zealand’s anemic productivity growth, which has lagged both Australia’s and the OECD average for decades.

But growth rates have yet to improve since Robertson’s Labour Party came to power in 2017. Productivity grew 0.7% in the year to March 2021, 0.9% the year before and 0.2% the year before that, the most recent data show.

That’s less than New Zealand’s 1.3% average growth rate over the past 25 years, which in turn trails Australia’s 1.9% average in that period.

New Zealanders work longer hours but produce less per hour than workers in most other OECD countries, according to the Productivity Commission.

“Every single New Zealand finance minister and finance spokesperson in opposition has looked for what it is that will shift the dial on productivity,” he said. “The problem is that there isn’t a simple answer because if there was it would have been found. It is a complex web of investments” by both the public and private sectors.

He said the government has invested in skills training, lifted R&D investment and worked on building international connections, and “these things will ramp up over time.”

“We don’t make enough use of the Crown Research Institutes to help drive that, or the blue skies research.”

A major review of that by Research, Science and Innovation Minister Ayesha Verrall is not far away from being released, he said.