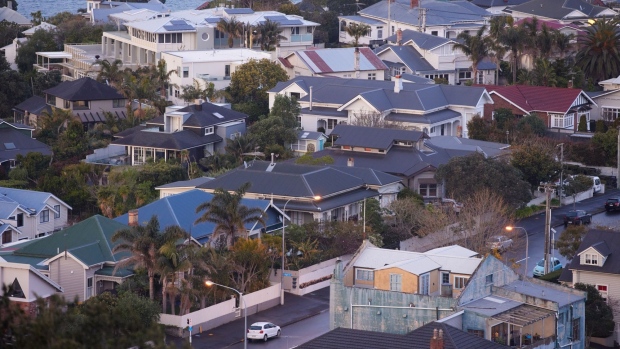 Buildings stand in Auckland, New Zealand, on Wednesday, Sept. 16, 2020. New Zealand’s economy will endure a shallower recession than previously expected but the coronavirus pandemic will have a longer impact on the country’s finances, according to government projections. , Brendon O'Hagan/Bloomberg

New Zealand’s government has proposed adding house prices to the central bank’s remit as the property market threatens to overheat amid record-low interest rates.Finance Minister Grant Robertson has written to Reserve Bank Governor Adrian Orr, asking him to consider amending the bank’s remit to include stability in house prices as a factor for monetary policy.

“With an extended period of low interest rates, and some time before housing supply can catch up with demand, now is the time to consider how the Reserve Bank may contribute to a stable housing market,” Robertson said Tuesday in Wellington. “I want to be clear I am not proposing any changes to the mandate or the independence of the Reserve Bank.”

Contrary to expectations of a drop in house prices during the coronavirus pandemic, prices have soared as borrowing costs dropped. That’s causing concern that many will be locked out of the housing market.

The RBNZ has cut its official cash rate to 0.25 per cent and embarked on quantitative easing to drive interest rates lower and stimulate economic growth. Next month it will start offering banks cheap loans in another effort to lower borrowing costs.In a letter to Orr released today, Robertson said the alternative policy tools the RBNZ is using were not envisaged when its remit was first published in 2019.“I believe it is right that we consider how these tools might be impacting on the housing market, with particular regard to housing price inflation,” Robertson wrote.

Specifically, he proposes adding house prices to a clause in the remit so that it asks the RBNZ’s Monetary Policy Committee to: “Seek to avoid unnecessary instability in output, interest rates, the exchange rate, and house prices.”

“I would welcome your views on any alternative proposals with regard to the Reserve Bank’s monetary and financial policy that would help address our concerns,” Robertson wrote. “This includes your views on any other changes that the bank could make to support the aim of achieving the sustained moderation in house prices that we have both sought.”

He said the government is planning to make any changes, if agreed, soon, “and so I would request that you gave it your earliest possible consideration.”