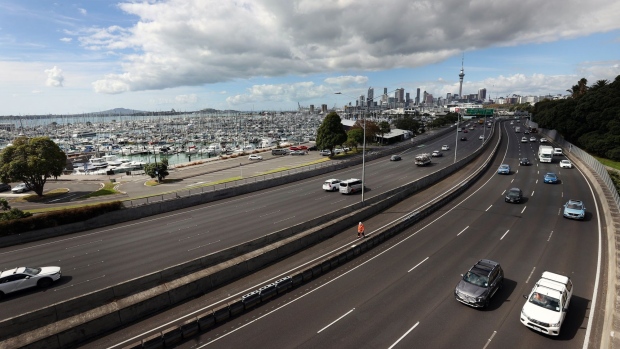 Vehicles travel along a road in Auckland. , Bloomberg

New Zealand will accelerate its adoption of electric vehicles and investigate hydrogen as an alternative energy source as it seeks to phase out fossil fuels and play its role in mitigating global warming.

Announcing its first emissions reduction plan Monday in Wellington, the government said it will initially allocate NZ$2.9 billion ($1.8 billion) over four years to fund a range of measures, from electric car incentives to phasing out coal boilers and helping farmers reduce methane emissions from livestock.

“This is a landmark day in our transition to a low emissions future,” Prime Minister Jacinda Ardern said in a statement. “We’ve all seen recent reports on sea-level rise and its impact right here in New Zealand. We cannot leave the issue of climate change until it’s too late to fix.”

Despite contributing only a tiny fraction to global greenhouse gas emissions, the government says New Zealand needs to play its part in limiting world temperature rise to 1.5 degrees Celsius above pre-industrial levels. But the measures announced today also aim to protect the nation’s environment and maintain the clean, green reputation it trades on.

“In New Zealand our environment really is our economy,” Finance Minister Grant Robertson said. “Our clean, green brand has never been more important.”

The government will step up efforts to decarbonize transport, aiming to have at least 30% of the country’s light vehicle fleet electric by 2035.

It will continue to provide a clean vehicle discount to encourage the purchase of low-emission cars, invest in electric vehicle charging infrastructure and help low and medium-income households to buy an electric car if they scrap their old gas guzzler. It will also trial an EV leasing scheme.

It aims to decarbonize the entire public transport fleet by 2035.

There will be efforts to reduce the waste going to landfills, with most households having access to kerbside food waste collection by 2030.

The government will also ban new low and medium-temperature coal boilers and phase out existing ones by 2037.

New Zealand’s economy relies on agriculture, particularly cows and sheep whose methane emissions are a major contributor to global warming.

The government said it will establish a Center for Climate Action on Agricultural Emissions, which will accelerate the research and development of products that help reduce on-farm greenhouse gases.

It will also invest in planting more trees to boost carbon sequestration, and work with major heat energy uses to help them transition to renewable sources.

Funds will be allocated to develop a comprehensive energy strategy, including a hydrogen roadmap and the creation of a regulatory framework for offshore wind energy.

“Hydrogen as a fuel could enable the decarbonization of hard to electrify sectors such as heavy freight and steel,” the government said. “The roadmap will provide the nascent green hydrogen sector with further clarity on how the government will support a pathway to an economically sustainable market for hydrogen.”

The initiatives will be paid for from a NZ$4.5 billion Climate Emergency Response Fund, which is backed by proceeds from the nation’s emissions trading scheme. The government last week set targets for greenhouse gas reductions over the next 14 years as part of its aim to achieve net zero emissions by 2050.

Three emissions budgets will act as stepping stones toward the 2050 goal.

Ardern said addressing climate change can bring down the cost of living – a key political theme as the country grapples with the fastest inflation in more than 30 years.

“Reducing our reliance on fossil fuels will shield households from the volatility of international price hikes while reducing transport and energy bills,” she said. “Households are already seeing the impact of escalating petrol prices and this plan sets out practical ways to cut power, transport and other costs by taking climate friendly actions.”