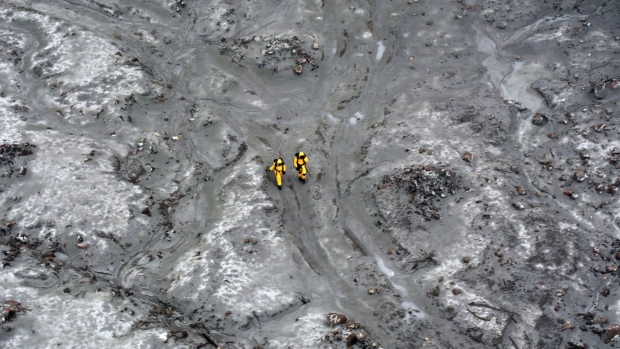 Recovery operation in Whakatane on Dec. 13. , Getty Images via Bloomberg

(Bloomberg) -- Four more victims of the White Island volcano eruption were identified by New Zealand police as the search for more bodies continues.

The names of a 24-year-old New Zealander and three Australians, ages 15 to 53, were released Sunday morning. Teams aboard three helicopters searching the volcano-island, also known by its Maori name Whakaari, in the North Island’s Bay of Plenty early Sunday failed to locate those still unaccounted for.

“We have always anticipated recovering all bodies from the island, and we remain deeply committed to that goal, to allow families some closure,” Deputy Commissioner John Tims said in a statement. “We are now debriefing, reassessing and coming up with a new plan going forward.”

The island erupted Monday afternoon in a forceful explosion of scorching steam, gas and ash, causing horrific burns to most of its 47 visitors.

Fifteen people have been confirmed dead. Fourteen people remain hospitalized in New Zealand, 13 have been transferred to Australia, and three have been discharged. Two people remain unaccounted for on or in the vicinity of the island, the Ministry of Civil Defence & Emergency Management said Sunday.

To contact the editors responsible for this story: Shamim Adam at sadam2@bloomberg.net, Jason Gale