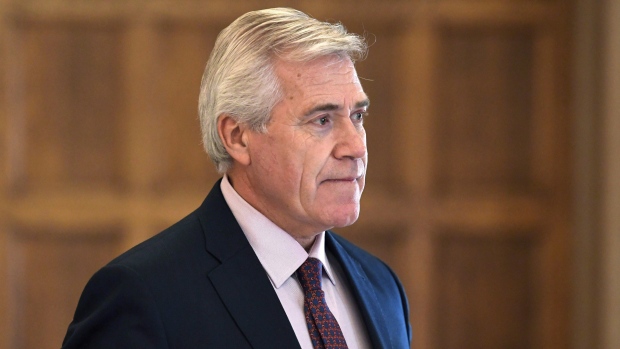 The $8.4-billion spending plan revealed Tuesday also forecasts a $683 million deficit and a shakeup at the Crown corporation responsible for huge cost overruns at the Muskrat Falls hydroelectric project.

Expenses will slightly rise as net debt for the province of just 529,000 people is expected to hit a historic high at $15.5 billion.

Finance Minister Tom Osborne said the profitable oil and gas sector will be hived off from Nalcor Energy, which oversees the delayed and over-budget Muskrat Falls development in Labrador. A new Crown corporation will focus solely on the oil sector off Newfoundland.

"We have a very, very strong future in the oil industry."

Osborne said there will still be demand for fossil fuels as the world increasingly shifts to renewable energy sources. He also said Newfoundland's offshore sector, while a significant carbon emitter, is relatively clean when compared to the Alberta oilsands.

Federally required plans for a provincial carbon tax will be introduced this spring, Osborne said.

Muskrat Falls, once fully online in 2020, will mean the province is almost totally powered by renewable hydro energy.

The 2018 budget also forecasts deficits in each of the next three fiscal years, returning to a modest surplus by 2023 if the price of oil hovers around US$74 a barrel.

The province will spend almost $3.2 billion on health care this year -- far higher per person than what's spent elsewhere in Canada, as it aims to cut smoking rates and increase exercise.

Osborne said the governing Liberals have made strides to get the province's battered fiscal house in order since the oil-price slide in 2014. They've cut 759 public sector jobs in the last two years and will reduce more through attrition as about 5,000 workers are eligible to retire, he told a news conference.

Cost-cutting efforts also include less discretionary spending, and working with management and unions to reduce overtime and sick leave.

If those revenues increase, they'll be used to eliminate deficits and pay down debt, he added.

Richard Alexander, executive director of the Newfoundland and Labrador Employers' Council, represents members who employ more than half the province's private sector workers. The council has called on the government for years to bring expenses more in line with reduced revenues.

Instead, it's spending far beyond its means while taking yet another gamble on volatile oil values, Alexander said in an interview.

"Plan B is, now we have to make expenditure reductions on top of having $15 billion in debt -- and that's a very risky plan."

Newfoundland and Labrador's tax rates are among the highest in Canada, driving young families away as the unemployment rate rose more than a percentage point last year to almost 15 per cent.

"It's stifling growth in the economy," Alexander said.

Others worry that an oil-or-bust approach makes the province an environmental laggard.

"We need to be looking at climate change," said interim NDP Leader Lorraine Michael. "If we don't get out of the mentality that our revenue is only going to be oil and gas, and start planning for a diversified economy, we're going to be 10 years down the road in the same situation."