Barrick's possible merger with Newmont is 'what you see at a market bottom': Mining analyst

In his first interview since Barrick confirmed Friday it has considered a bid for Newmont, Gary Goldberg said he’s focused on completing the Goldcorp takeover and questioned whether Barrick’s management is equipped to run a combined Newmont-Barrick.

“It’s a desperate and bizarre attempt to muddle up our deal,” he said, “And it’s certainly not the sort of behavior that will appeal to investors who want to invest in serious, well-run companies.”

In January, Newmont agreed to buy Goldcorp in an all-stock deal valued at $10 billion. That purchase is set to be the largest gold mining deal in history and would secure Greenwood Village, Colorado-based Newmont’s lead over Barrick as the largest producer. If Barrick were to push through a deal for Newmont, it would reclaim the top spot and create a gold mining behemoth, producing 10 million ounces a year.

A representative for Barrick didn’t respond to requests for comment.

Goldberg pushed back against the notion that size matters, saying that Barrick’s desire to be the biggest had made takeover interest inevitable.

“We like value, not size for its own sake,” Goldberg said. “Being biggest isn’t important to us but it’s obviously very important to some of them.”

Barrick, led by executive chairman John Thornton, has weighed an all-share, nil-premium bid for Newmont. The Toronto-based miner ramped up pressure on Friday, telling Newmont it had acquired shares through a subsidiary and intended to propose changes to its rival’s bylaws -- a move that would ease the path to a hostile takeover. 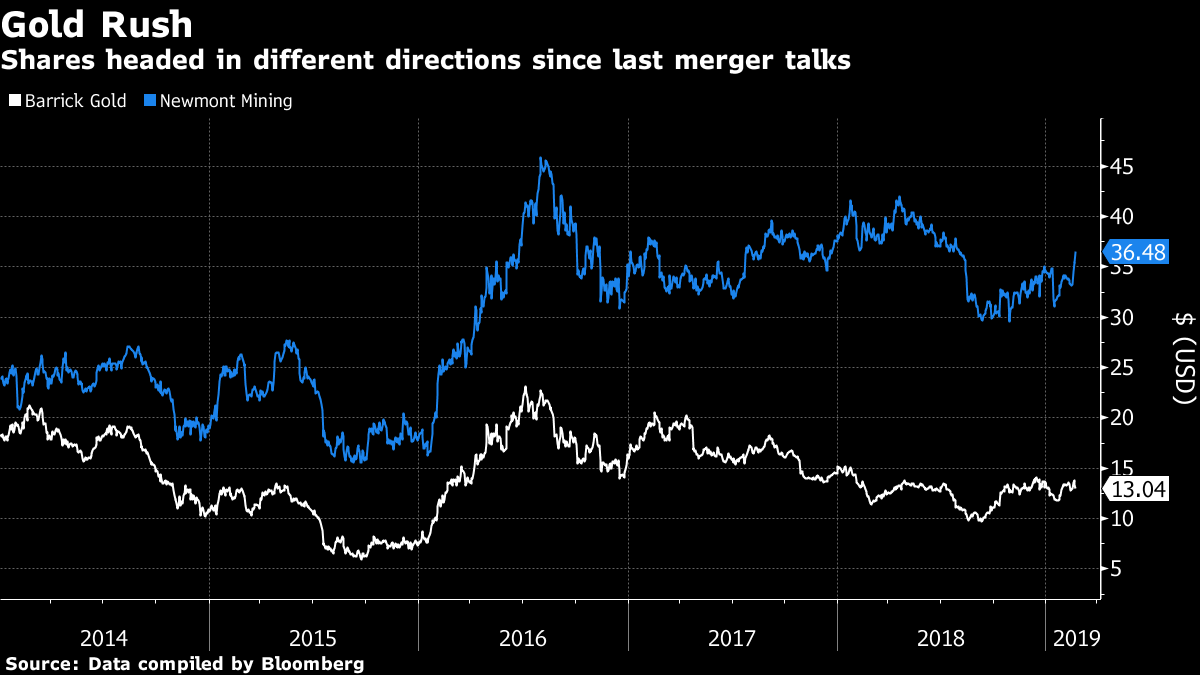 “Bristow and I spoke on Dec. 20 about doing something in east Nevada and he seemed amenable to it at the time,” Goldberg said. “It leaves me a bit perplexed as to why they would try and take this hostile approach now”.

The geographic rationale for putting the mining giants together is also flawed, he said.

“What we have taken on with the Goldcorp deal are complementary assets, giving us exposure in the Americas, Australia and Ghana. A deal with Barrick would increase sovereign risk as we’d be taking on much more Africa and, presumably, spinning off Australia.”

One possibility that Barrick has studied would involve teaming up with a partner such as Melbourne-based Newcrest Mining Ltd. in a bid for Newmont, people familiar with the matter said last week.

Goldberg said Newmont’s board would properly assess any takeover proposal it receives, but that his focus at this week’s BMO Capital Markets mining conference would be to outline the benefits of the Goldcorp deal and plans for exploration spending. Newmont has said the tie-up will deliver annual pretax savings of US$265 million.

The centerpiece of his speech at the conference will focus on shareholder returns since the companies last held talks. Since the beginning of 2014, Barrick’s total shareholder returns are down 22 per cent, including reinvested dividends, according to data compiled by Bloomberg. Newmont’s is up 65 per cent over the same period, the data show, while the price of gold has climbed 10 per cent.

Asked how he would feel about seeing Bristow at the conference, Goldberg said he was unconcerned.

“I made the decision back in 2014 that going alone was better for our shareholders. I thought that then, and I still think that.”