The cost to create the world’s largest gold company: A 17 per cent premium for a US$10 billion all-shares acquisition that faces some big-time challenges down the line.

Newmont Mining Corp.’s deal for Goldcorp Inc. stands in stark contrast to the recent zero-premium merger between Barrick Gold Corp. and Randgold Resources. The key question: Why? In October, Goldcorp shares fell to their lowest since 2002 after the miner reported lower output and higher costs than expected. Since then the stock improved only marginally before today.

The merged company will have the world’s largest production and reserve base, and the kind of liquidity and diversified assets required to attract institutional investors, Stephen D. Walker, an analyst with RBC Capital markets, wrote in a research note.

But at the same time, "Newmont has some difficult times ahead with drastic surgery needed at Goldcorp,” according to John Ing, an analyst at Maison Placements Canada. “In the short term and medium term, the deal is not good for Newmont,” Ing said in an interview with Bloomberg News on Monday.

Colorado-based Newmont fell 8.9 per cent to close at US$31.78 in New York trading, while Vancouver-based Goldcorp gained 7.5 per cent to CUS$13.83 in Toronto. Goldcorp shares traded in the U.S. advanced 7.1 per cent.

Newmont has said it intends to shed as much as US$1.5 billion in assets over the next two years. Likely targets would be Red Lake, Musselwhite and Porcupine from Goldcorp’s mines and possibly Newmont’s Ghana’s mines, according to Walker.

While the premium overvalues the quality of Goldcorp’s asset, the value will return to Newmont’s stock if it "shows it can manage those assets over time," said Joseph Foster, a New York-based portfolio manager at VanEck International Investors, by telephone.

Others were more positive. There is a “fairly compelling rationale” for the merger, wrote Barclays Plc’s Matthew Murphy. The 17 per cent premium is “modest” given the performance of Goldcorp shares as recently as five months ago “but perhaps enough given the level of frustration voiced by GC shareholders.”

Hours after announcing a deal, Gary Goldberg, Newmont’s outgoing chief executive officer, said he’s already fielding calls from miners interested in buying any assets he may be willing to sell.

“I’ve had lots of inbound calls today from different folks who have interest in different assets, so I know there’s lots of interest out there,” Goldberg told analyst in a conference call. Newmont will go through detailed process to determine which assets it intends to sell and to prioritize projects to advance, he said. 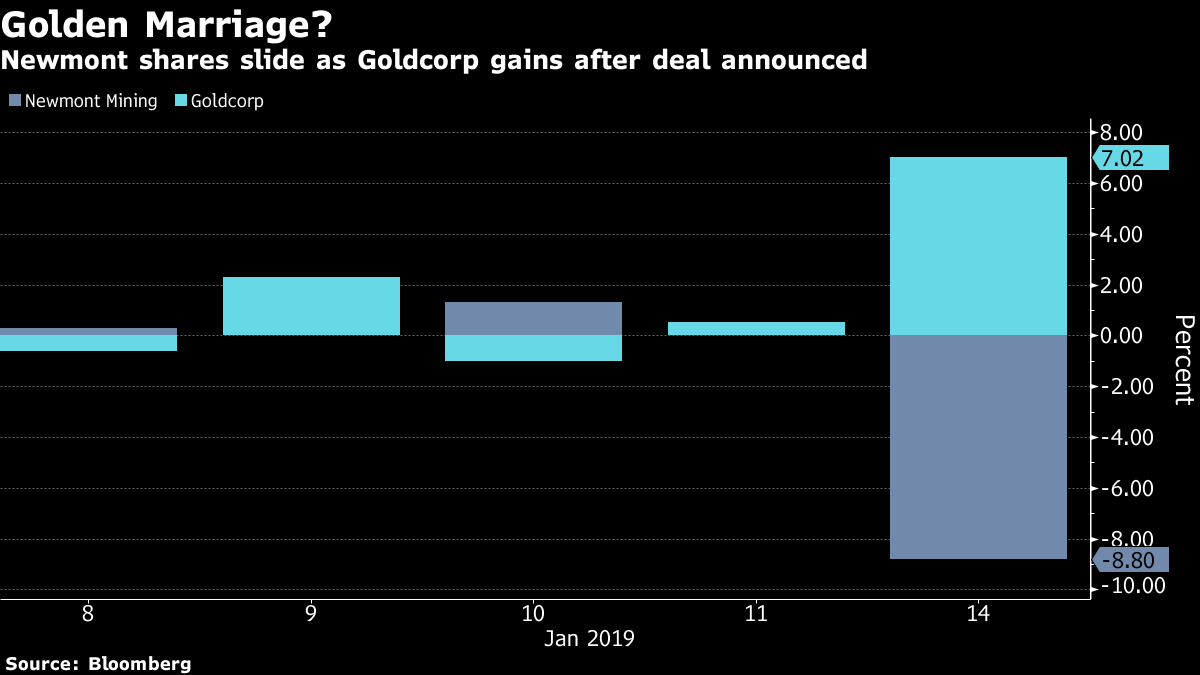 “For the larger companies, they are feeling pressure due to lack of success with the drill bit and the Randgold-Barrick merger,” Denbow said. "‘There is a consolidation drive at all levels of the business running from asset level, merger of equals of small to intermediate companies to the mega merger. All trying to get synergies in overhead, access to capital and relevance with investors."

Tom Palmer, the incoming head of the merged company, is a relative newcomer to the gold space but has decades of experience in the mining world, including more than 20 years with Rio Tinto Group. He’ll take over the reins of of a company capable of producing six to seven million ounces of gold for decades, even after it sheds assets.

Goldberg, the current Newmont CEO, is expected to retire by the end of 2019, after seeing through the transition which is expected to be “substantially completed” in the fourth quarter of 2019, the companies said in a joint statement. Current chairwoman Noreen Doyle will retain her position in the merged company.

“The problem for Goldcorp is they overpromised and underdelivered,” said Andrew Cosgrove, an analyst with Bloomberg Intelligence. Newmont is "going to have to prove that they can ride the ship on the Goldcorp asset base."

--With assistance from Thomas Biesheuvel and Aoyon Ashraf