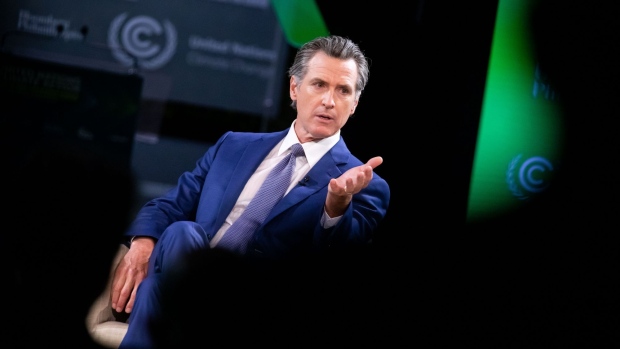 Gavin Newsom, governor of California, speaks during the United Nations Climate Action: Race to Zero and Resilience Forum in New York, US, on Wednesday, Sept. 21, 2022. The Forum convenes heads of state and leaders from cities, regions, businesses, and investors to mark progress and turbocharge climate action ahead of COP27. , Bloomberg

(Bloomberg) -- California Governor Gavin Newsom called for a windfall tax on oil companies and allowed for production of a cheaper blend of gasoline as the state faces a surge in fuel prices.

The Democrat said in a video that refiners have failed to provide an explanation on why rising pump prices in California have diverged from the rest of the country, where prices have fallen or are holding steady, and he accused companies of extortion. California gasoline prices surged to $6.29 a gallon as of Friday, up from $5.58 a gallon a week earlier, according to data from auto club AAA.

“The fact is, they’re ripping you off,” Newsom said. “Their record profits are coming at your expense.”

Revenues stemming from the proposed windfall tax would go directly back to California taxpayers as a way to alleviate the burden of higher costs, the governor said, without providing more details.

California will also allow refineries to make an early transition to the so-called winter-blend gasoline, which is cheaper to produce. In 2012, prices fell by 47 cents per gallon about 20 days after a similar measure was taken, according to a statement from the governor’s office.