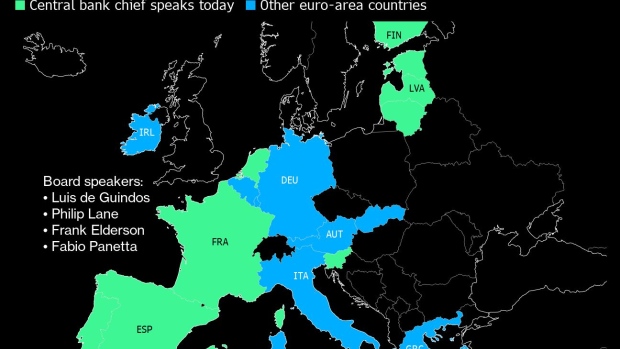 Flags of the European Union (EU) outside the headquarters of the European Central Bank (ECB) in Frankfurt, Germany, on Monday, May 23, 2022. While ECB policy makers have increasingly coalesced around the prospect of a first hike at their July 21 meeting in recent weeks, they have barely mentioned the possibility of a more aggressive half-point move such as the US Federal Reserve delivered this month. , Bloomberg

(Bloomberg) -- The European Central Bank should opt for a “big” increase in interest rates in October, according to Governing Council member Martins Kazaks, who said in an interview that subsequent hikes are likely to be smaller.

His Baltic counterparts Gediminas Simkus and Madis Muller also indicated they’d back significant moves, while Mario Centeno of Portugal called for a “measured and balanced” approach and Spain’s Pablo Hernandez de Cos revealed an estimate for the terminal rate.

The central bank chiefs are part of a mammoth day of ECB speakers that’s shedding light on policy makers’ next rate move as inflation shows no signs of letting up and the continent teeters on the brink of a recession.

Thirteen of the Governing Council’s 25 members are appearing on Thursday at events from Amsterdam to Vilnius, with investors also looking for clues on where the current rate cycle may peak and when the trillions of euros of bonds purchased during recent crises may start to be shrunk.

The remarks -- as well as inflation data from Spain and Germany -- have the power to reshape money-market rate bets, which currently lean toward a second 75 basis-point hike being delivered at next month’s meeting.

German inflation reached double digits for the first time since the euro was introduced more than 20 years ago, surging more than anticipated after temporary government-relief measures ended and Europe’s energy crisis worsened.

Consumer prices jumped 10.9% from a year ago in September, topping August’s 8.8% advance, the Federal Statistics Office said Thursday. That’s more than the 10.2% economists in a Bloomberg survey had estimated.

A spike in inflation was expected as Germany wound down summer discounts on public transport and fuel. But the scale of the acceleration will trouble the European Central Bank, which is struggling to tame soaring prices whose persistent ascent is set to break another record when data are released on Friday.

The German government on Thursday announced it would put a lid on gas prices, a move that could tame inflation readings going forward. Chancellor Olaf Scholz’s administration will borrow at least €150 billion ($146 billion) for the initiative, according to people familiar with the matter.

Speaking at a biodiversity conference in Amsterdam, French central bank chief Francois Villeroy de Galhau highlighted the importance of the topic, while suggesting the onus for now may be on climate change.

“Many advocate for priority to be given to climate-risks, as we know them better, and as we have the right instruments at our disposal,” he said. “I would like to call for extending our scope progressively but with conviction. First climate change, on which we must proceed as swiftly as possible,” and biodiversity after that.

Investors didn’t panic at the ECB’s initial bigger-than-expected increases in interest rates and can handle another large hike, according to ECB Governing Council member Martins Kazaks.

“We’ve seen that the 50 basis points, 75 points points were taken by the market relatively confidently,” he told Bloomberg TV. “That also provides confidence to me that 75 basis points would be an appropriate choice for the next meeting.”

The plunge in the value of the euro “does worry me,” Kazaks also said. “A weak euro does increase inflation.”

A terminal rate of 2.25% to 2.5% would bring inflation down to the ECB’s 2% target by end-2024, European Central Bank Governing Council member Pablo Hernandez de Cos said, citing a model by the Bank of Spain, which he heads.

While stressing that the below-market forecast depends on data and may yet shift, de Cos called it a “valuable tool for providing citizens with some guidance on the magnitude of the adjustment that we expect” in our interest rates. Even so, he said that raising interest rates “immediately” to the terminal level isn’t advisable given the uncertainty surrounding the euro-zone economy.

In a published speech, De Cos reiterated that the ECB should continue hiking rates to head off second-round inflation effects and keep price expectations from becoming de-anchoring. Those efforts, however, shouldn’t inflict “unnecessary suffering” on euro-area citizens.

De Cos said the ECB’s decision to normalize monetary policy by raising rates rather than shrinking its balance sheet is due in part to potential market turmoil from the latter step. But, he acknowledged, officials could yet decide to start reducing the stock of assets accumulated under the APP program earlier than markets anticipate.

Olli Rehn, the ECB Governing Council member from Finland, has just been speaking on the need for a “significant” rate increase at the next meeting in October.

“This front loading we have decided in our July and September meetings has been making sense, has been justified,” he said in Helsinki. “We need significant rate hikes also in our forthcoming meetings.”

He reckons the ECB will reach a neutral rate which no longer stimulates the economy by December, implying a move of “75 or 50 basis points or something else in the next meeting.”

Euro-area economic confidence dropped to the lowest since 2020 this month as record inflation and the prospect of the first winter in a generation without Russian gas cast a shadow over the region.

A measure of sentiment compiled by the European Commission fell to 93.7 in September. That’s less than the median forecast in a Bloomberg survey of economists and the lowest since November 2020. The outcome marks the seventh consecutive monthly decline.

In the runup to Germany’s headline September inflation number at 2 p.m., state-level data are coming in hot.

The regional figures published so far point to a reading of 10%, according to Oliver Rakau of Oxford Economics. A Bloomberg survey of analysts estimates inflation accelerated to 9.5% using a German national measure and 10.2% under European Union harmonized standards.

ECB official Mario Centeno reiterated his call that the ECB must be cautious as they try to stem any potential advances in inflation expectations. Policy “must act always at the margin” and be “predictable,” he told a conference in Vilnius. That leads to more effective interaction with fiscal policy, which must avoid feeding inflationary pressure.

“Any form of fiscal support should be timely, temporary and targeted toward the most affected and vulnerable in our society,” Centeno said. Effective interaction “requires monetary policy not to impede the efforts of reconstruction of supply-side bottlenecks that resulted from Covid and now this unprovoked war of Russia.”

“Around €40 trillion of global income relies on nature,” ECB Executive Board member Frank Elderson said in Amsterdam. “This means that nature-related risks, including those associated with biodiversity loss, could have significant macroeconomic implications.”

ECB Governing Council member Bostjan Vasle said rate increases should carry on at about the same pace they have been as inflation continues to set new records.

“We expect to raise them further over the next several meetings,” Vasle said Thursday in Ljubljana. “My impression is that the current pace is an appropriate response to elevated inflation, and we should continue with it through the next few meetings.”

“The scope and nature of fiscal measures needs to be different now than it was at the height of the pandemic, following a long period of too low inflation,” . Fiscal policy should not stoke inflation. It needs to be temporary and tailored to the most vulnerable households and businesses, who are being hardest hit by high inflation.

Germany’s economy will likely contract by 0.4% next year due to the impact of the energy crisis, according to the nation’s leading research institutes, who slashed their forecast from April of a 3.1% expansion.

The Bank of Finland governor shared his views in a bulletin from his institution. Note that Rehn is a former EU commissioner for economic and monetary affairs.

“The efforts of EU countries to identify ways to limit household energy bills are understandable, but indiscriminately increasing expenditure would not be and would not help in the fight against inflation,” he said. “It would instead be right to balance out the effects of the rise in prices through tailored, temporary measures targeted at the most vulnerable.”

While the surge in inflation has so far been reflected “only moderately” in wage trends within the euro area, “the task of monetary policy is to ensure that inflation expectations remain anchored,” Rehn said.

The ECB has endorsed a “first set of foundational design choices” for a digital euro, Executive Board member Fabio Panetta told lawmakers in Brussels. Officials will explore options that could allow the replication of some cash-like features and enable greater privacy for low-value transactions, he said, adding that limit and remuneration-based tools will ensure a digital euro isn’t used excessively as a form of investment.

The approval “has no bearing” on whether the ECB will ultimately issue a digital euro, he said. A decision to move into the “realization phase” will likely be taken in October next year.

Spanish inflation eased for a second month and by more than anticipated, slowing to below 10% as the worsening cost-of-living crisis saps momentum from the euro zone’s fourth-biggest economy.

The ECB should raise rates next month by an amount resembling the large increases it has already delivered, according to Governing Council member Madis Muller.

“We have had two significant hikes already, and I think something in the same ballpark would be called for if we’re looking at the outlook as of now,” the Estonian central bank chief told Bloomberg Television on Thursday in an interview.

ECB Governing Council member Mario Centeno warned that lifting interest rates too much to curb inflation risks having to partially reverse the moves down the line as the economy weakens.

The ECB should raise interest rates by another 75 basis points when it next sets policy in October, with steps likely to get smaller after that, according to Governing Council member Martins Kazaks.

“In the current situation, we can still make big steps, and the next step still has to be big because we are still far away from rates that are consistent with 2% inflation,” Kazaks said Wednesday in an interview in Vilnius. “I would side with 75 basis points -- let’s take a bigger step and move the rates up faster.”

Coming Up (all times Frankfurt)