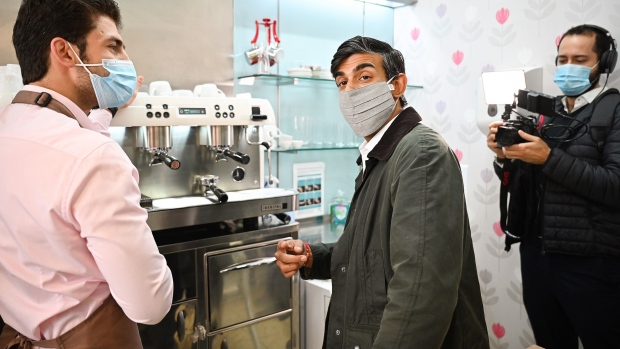 ROTHESAY, SCOTLAND - AUGUST 07: Chancellor of the Exchequer Rishi Sunak meets with local business people during a visit on the Isle of Bute on August 07, 2020 in Rothesay, Scotland. In recent media interviews, the chancellor has warned that the current furlough program, which subsidises wages for UK employees whose work was suspended by pandemic lockdowns, is not sustainable for the long term. (Photo by Jeff J Mitchell/Getty Images) , Photographer: Jeff J Mitchell/Getty Images Europe

(Bloomberg Opinion) -- The pandemic has asked many difficult questions of Europe’s governments, from whether to close down schools to which companies to bail out.

As economies continue to open up, politicians face a new daunting choice: Should they leave their employment furlough schemes in place? These support programs have kept workers in their jobs (artificially) at a vast cost to the public coffers, but phasing them out risks creating mass unemployment.

The proper response will involve a combination of iron fist and velvet glove. Governments must be under no illusion that they can protect all jobs in the economy. Some companies, especially in retail and leisure, were vulnerable to changing consumer habits even before Covid struck. But policy makers need to have the means to help the newly unemployed, given the expected scale of joblessness. They’ll also need to ensure that any decision to taper the furlough schemes is easily reversible if a future pandemic wave shuts the economy again.

Europe’s labor markets are in a very precarious state. Take the U.K.: The country’s headline unemployment rate stayed at 3.9% in the second quarter of this year, as companies kept workers on their payrolls because of the government’s generous furlough scheme, and people without a job couldn’t actively search for a new one (meaning they weren’t classed as being unemployed). However, the picture was more troubling when you looked at how many Brits actually have jobs. In the three months between April and June, there were 220,000 fewer people in work than in the previous quarter — the steepest decline since the financial crisis.

In the euro area, meanwhile, unemployment overall has barely ticked up, to 7.8% in June from 7.7% a month earlier, as furlough schemes take much of the strain. But cracks are appearing here too. In Spain, the jobless rate rose by nearly a full percentage point to 15.3% in the three months to June, as the number of inactive people of working age rose by 1 million to 17.6 million.

The good news is that Europe’s economic activity appears to be bouncing back, as governments have done a decent job — so far — in keeping the pandemic in check; certainly much better than some other countries such as the U.S. The labor market data are backward looking (the U.K. was in lockdown during much of the second quarter), and more recent indicators show a rebound in manufacturing and services.

And yet, this slow return to normality is forcing politicians, including U.K. Chancellor of the Exchequer Rishi Sunak, to rethink the extraordinary support they’ve provided in the first half of this year. As well as the extreme cost of furloughing, politicians also worry that it provides the wrong incentives to companies and workers, by propping up zombie firms and encouraging shirkers.

Sunak has started to phase out his furlough scheme this month, shifting more of the burden onto companies. Spain’s government has extended its own emergency job support plan until the end of September, but it is cutting back on exemptions for companies on their social security contributions.

In a perfect world, clever politicians would withdraw their help from companies that can stand on their feet again, and from those that have no chance of surviving. Then they can direct their firepower toward those that need some more temporary aid, but which have a decent chance of recovering eventually. Unfortunately, it’s very difficult to distinguish which firm belongs in which category. Most businesses will claim their difficulties are only temporary, even those in blighted sectors such as aviation and hospitality.

The slow unwinding of the U.K. and Spanish furlough schemes looks like a wise approach. But, as the OECD has argued in a recent paper, governments need to complement this strategy in two ways. For a start, they must strengthen their social safety nets by boosting unemployment benefits and — above all — their retraining schemes for the jobless. As the OECD noted, in countries such as the U.K. the gap between the furlough scheme payouts and unemployment benefits is too large. Spain’s labor market policies have been weak traditionally, which bodes badly for those who work in sectors with no clear future.

Finally, politicians — even conservative ones — mustn’t be ideological about furlough schemes. A second pandemic wave, perhaps during the autumn or the winter, remains possible. That would force new draconian social-distancing measures, possibly including some form of lockdown. European countries have to be ready to freeze their economies again, much like they did during the spring. Government support may be expensive — and distasteful to some — but it’s been essential in this crisis.

Ferdinando Giugliano writes columns and editorials on European economics for Bloomberg View. He is also an economics columnist for La Repubblica and was a member of the editorial board of the Financial Times.