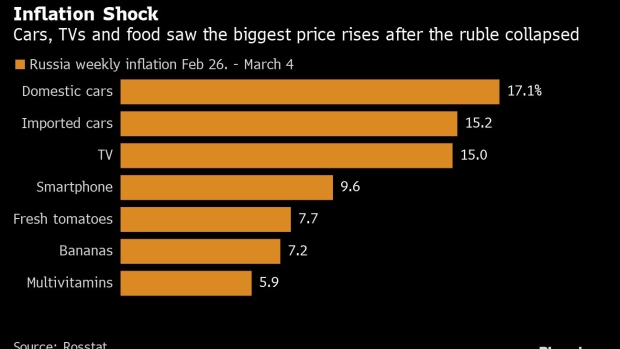 (Bloomberg) -- Russia is headed for one of its biggest inflation spikes this century after waves of sanctions over the invasion of Ukraine touched off the collapse of the ruble and disrupted trade.

In the first full week since the military offensive began late in February, prices for new domestic cars soared over 17% and the cost of television sets jumped 15%. Some medicines and vegetables became 5% to 7% more expensive in the seven days ending March 4.

Overall, inflation in the period reached 2.2%, according to a report by the Federal Statistics Service on Wednesday, the sharpest weekly increase since it started tracking the data in 2008 and more than double the previous record.

It’s one of the starkest measures yet of the damage wrought on Russia’s economy by the war. For a country increasingly cut off from the outside world, the risk of shortages has already prompted the government to impose a temporary ban on re-exports of foreign medical products and to say it will restrict trade in some goods and raw materials.

The ruble’s collapse of nearly 40% so far this year will further ravage household finances, threatening a crisis in the cost of living reminiscent of the 1990s.

Bloomberg Economics predicts inflation will peak at an annual 19% around July, compared with 9.2% last month, and end the year at about 16%. Before the war, it saw price growth cresting below 10% and reaching 5.8% at end-2022.

Bank of America Corp. expects inflation will surge to 20% over the course of this year, while the National Institute of Economic and Social Research in London sees it rising even above that level. Russian inflation hasn’t been at 20% since 2001.

A slew of international companies has left Russia in response to its invasion of Ukraine, adding to fears of scarcity. The Bank of Russia’s efforts to stem the ruble’s collapse by hiking interest rates to 20% and announcing drastic curbs on foreign-exchange purchases have so far failed to stem the rout.

The upswing in inflation is already playing out in the streets of Russian cities. Abu Ghosh, a Middle-Eastern cafe off Moscow’s historic Arbat neighborhood, said on Instagram that it had seen prices for some ingredients rise 300%.

And a coffee shop in an upmarket area of Moscow said it would now have to change prices every Friday due to the volatile exchange rate.

“We buy coffee every week at the current exchange rate, so our prices will be variable,” Chernyi Cooperative said in a post on Instagram.