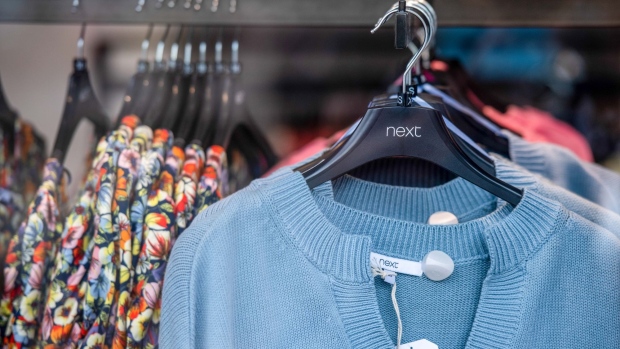 A display of "New Arrivals" in the window of a Next Plc store in London, UK, on Monday, Aug. 1, 2022. Next will release their second-quarter results on Thursday. Photographer: Chris J. Ratcliffe/Bloomberg , Bloomberg

(Bloomberg) -- Next Plc issued its second profit warning this year due to soaring inflation and a devaluation of the pound which has undermined consumer confidence.

The British clothing and housewares chain said Thursday that profit for the year will total £840 million ($905 million), compared with previous guidance of £860 million. Full-price sales in the second half are expected to drop 1.5% rather than climb 1%.

Next said that sales in August “slowed significantly” and pressure from the highest inflation in four decades will rise in the coming months into next year, aggravated by the recent slump in the value of the pound.

Next stock fell 6% in early trading in London.

The changing outlook demonstrates how hard it is for retailers to predict performance as the cost-of-living crisis hits spending on everything from food to household bills. The retailer, seen as a bellwether for the health of Britain’s main streets, cut guidance earlier this year before raising its outlook last month.

“With so many variables at play, predicting near-term sales trends is unusually difficult,” Chief Executive Officer Simon Wolfson wrote in the earnings update. “All the more so with recent government stimulus measures yet to take full effect.”

All retailers are battling against weak consumer demand in the UK. Prices in British shops hit a fresh record high this month, with brands increasingly having to pass costs onto consumers. Online fast-fashion retailer Boohoo Group Plc cut its profit guidance Wednesday as soaring bills stop consumers from spending on clothes and shoes.

Hennes & Mauritz AB said Thursday that operating profit dropped below analysts’ estimates in the three months through August after the retailer’s exit from Russia and higher costs caused earnings to slump.

The predicament  for UK retailers is worsened by the fall in the pound which is on track for its worst month since Britain voted to leave the European Union on concern that Prime Minister Liz Truss’s new fiscal stimulus measures could fuel inflation and the nation’s ballooning debt.

“Going forward, the devaluation of the pound looks set to prolong inflation, even once factory gate prices ease,” said Wolfson. “It looks like we may be set to have two cost of living crises: this year, a supply-side led squeeze, next year a currency-led price hike as devaluation takes effect.”

Next has around 500 stores in the UK and Ireland and a large domestic and international online division selling its own range of fashion, as well as third-party brands. It also uses its infrastructure network to help rival brands sell their goods online.

(Updates with comments from statement starting in fifth graph)