If you thought the U.S. jobs report for May was confusing, June’s could be even worse.

The U.S. Bureau of Labor Statistics, which publishes the widely-watched monthly figures on the world’s largest economy, is taking additional steps to solve data-collection issues that since March have resulted in an official unemployment rate that appears to understate the true scale of joblessness in America during the coronavirus pandemic.

Fixing one problem may create another, though: The official June jobless rate would be tricky to compare with May’s. And if the unemployed are counted properly, it could very well result in an increase in the official rate from the previous month — even if the reality is that joblessness fell in June, as many economists expect. 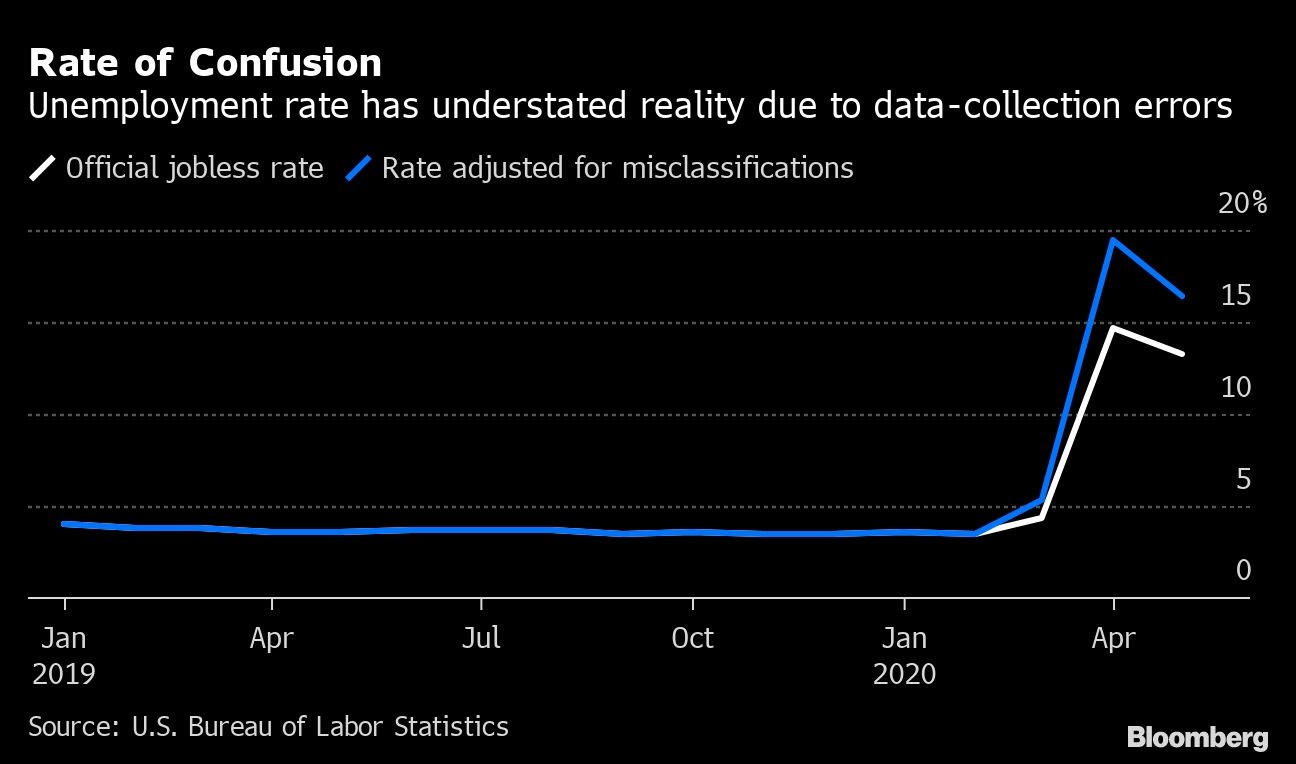 Here’s what happened: While the official unemployment rate posted a surprise drop last month, to 13.3 per cent from 14.7 per cent, the BLS said the May figure, when adjusted for data errors, would have been 16.4 per cent. The problem stemmed from respondents misunderstanding questions, or survey-takers failing to properly code many people as unemployed while temporarily laid off. Instead, many people seem to have been misclassified as being employed but not at work due to other reasons, which is assumed to reflect the pandemic.

The official unemployment rates for different demographic groups — African Americans as well as white, Hispanic and Asian workers — have all likely been understated as well. For April, the unemployment rate would have been 19.5 per cent when adjusted for the error, according to BLS.

So if the data issue is solved in June and millions of workers are moved from the employed category to the unemployed one, but the labour market in reality improves, the official rate might appear to increase from 13.3 per cent in May to, for example, 15 per cent in June — when the more appropriate comparison might be to the BLS’s adjusted May rate of 16.4 per cent.

It all has the potential to create serious confusion in financial markets and in politics as well. People who say the unemployment rate rose could cite May’s official rate, and people who say it declined could reference May’s unofficial rate. As President Donald Trump looks to highlight additional signs of an economic rebound after falling behind 2020 Democratic challenger Joe Biden in polls, the numbers are taking on extra importance.

The BLS will “report what the official unemployment rate did, without taking into account the misclassification,” Julie Hatch Maxfield, the agency’s associate commissioner for employment and unemployment statistics, said in an interview on Friday. “We won’t be able to quantify the difference between just general labour-market changes and changes due to the enhanced training” of survey-takers.

However it’s sliced, the BLS is likely to face obstacles in explaining to the general public what’s actually happening.

“We will try to be as transparent as possible for the reasons that we believe the change occurred,” Maxfield said.

The challenges with the unemployment rate may put extra focus on the payroll figures, released at the same time and derived from a separate monthly survey of businesses and government agencies. That survey isn’t susceptible to the misclassification error.

“The real issue comes is if we get divergent signals from these two surveys,” said Matthew Luzzetti, chief U.S. economist at Deutsche Bank. A closer look will be needed to answer the question: Is it due to the misclassification, or is it potentially due to something else?

Part of the problem stems from BLS’s policy of not changing any survey responses after the fact. And while the agency can estimate the number of misclassified workers, it’s impossible to actually know.

The rigidity and consistency of the statistical process is part of what gives BLS’s numbers a reliable reputation. But that rigidity could ultimately mean the figures for recent months carry a permanent asterisk in the record books. That would leave open the question of how high the unemployment rate really went during the pandemic’s most intense period of job losses.

“This is a messy situation. It will always be messy,” said Erica Groshen, a former BLS commissioner. “It’s undeniably awkward and we just have to chalk it up to one more” impact of COVID-19.

Further complicating the June payroll figures is what’s expected to be a weaker response rate due to a shorter survey period of 10 business days. The June report will be released on Thursday, July 2, a day earlier than usual due to the Independence Day holiday being observed on July 3. In any given month, the collection period can range from 10 to 16 days.

Response rates have been lower during the pandemic, particularly for the household survey, which informs the unemployment rate. Maxfield nevertheless expressed confidence in the figures’ reliability now and over coming months.

“Even though response rates are lower, they’re still significantly higher than a lot of other surveys out there so thankfully we have a bigger cushion,” Maxfield said.