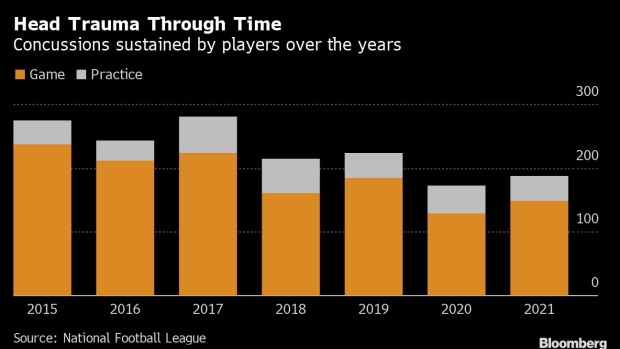 (Bloomberg) -- When Miami Dolphins Quarterback Tua Tagovailoa was slammed head first into the turf during a Sept. 29 game in Cincinnati, his hands began to curl into unnatural positions in front of his helmet as he lay flat on his back.

The odd movement, known as the fencing response, was an indicator of brain trauma. He was taken off the field on a stretcher to a city hospital and later flew home with his team, where he underwent more testing.

This was the second apparent head injury Tagovailoa had sustained in less than a week, igniting a flurry of criticism from medical experts and sports fans calling for an overhaul of the National Football League’s concussion protocol.

The NFL defines a concussion as “a traumatic brain injury induced by biomechanical forces” that are often caused by a direct blow to the head, face, neck.

When a player gets hit in the head during a game and displays common concussion symptoms, the concussion protocol is triggered.

“It involves an evaluation where the player is looked at on the sideline for indications of whether or not they’re able to return to play or need to get additional observation in the locker room,” said Daniel Daneshvar, a brain injury physician and assistant professor of physical medicine and rehabilitation at Harvard Medical School.

A non-affiliated doctor then looks for “no-go” symptoms, such as loss of consciousness, gross motor instability or issues with balance, which are key indicators that a player shouldn’t return to play.

In Tagovailoa’s first incident, he was cleared to re-enter the game on Sept. 25 after a tough hit left him stumbling. The NFL said afterward that it appears the Dolphins correctly followed concussion protocol in allowing him to return to the game. Four days later, he suffered another brutal hit.

The NFL Players Association, the labor union representing the athletes, was already investigating how the Dolphins handled Tagovailoa’s evaluation after the first hit and issued a short statement after he was carted off the field against Cincinnati.

“There’s a lot of incentives to pressure athletes and the folks around them to return them to play,” Daneshvar said. “And those pressures, for the most part, don’t exist for nonathletes.”

Concussion symptoms don’t always appear instantly after impact, he added. This allows some injured players to get clearance to play shortly after evaluation.

Repeated concussions over the course of a playing career can lead to brain damage and grave health issues. One notable risk is chronic traumatic encephalopathy, or CTE, which is linked to memory loss, slurred speech, behavior changes and dementia.