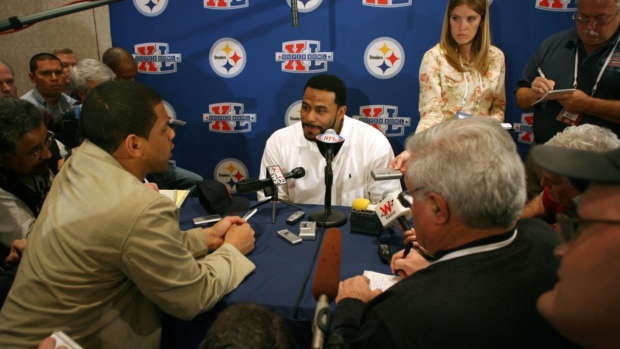 Pittsburgh Steelers running back Jerome Bettis talks with reporters January 30, 2006, in his home town of Detroit, Michigan, where his team will face the Seattle Seahawks on February 5. , Mason Levinson/Bloomberg News.

IntegrServ LLC, a Black-owned firm that hauls water and drilling mud, is seeking at least US$66 million for breach of contract after EQT cut ties with Bettis and his brother John while continuing to work with White contractors they partnered with, according to the lawsuit filed Aug. 18 with a U.S. District Court in Pittsburgh. The White contractors partnered with the Bettis brothers in late 2017 to form IntegrServ at the urging of EQT to achieve its diversity goals.

EQT said the suit is “entirely without merit and contains a number of false statements.” Contracts with non-minority owned businesses have also been terminated “as part of a program to drive efficiencies and accountability,” the driller said by email.

The IntegrServ contract was terminated on Aug. 22 of last year, six weeks after Toby Rice -- a former All-American college baseball player turned shale tycoon -- became chief executive officer of Pittsburgh-based EQT on pledges to cut costs. The appointment resulted from his victory in a proxy battle against EQT, which had bought his family’s Rice Energy for $6 billion in 2017.

In a meeting with one of the White partners, Rice complained of EQT’s “sweetheart deals,” said “I hate those contracts” and blamed the former Pittsburgh Steelers running back for “stealing my money,” according to the lawsuit.

IntegrServ says it provided a plan to correct these issues and that EQT didn’t acknowledge it. The Bettis brothers say EQT didn’t raise any safety concerns and that their company had been given EQT’s Safety Award.

EQT said it “will vigorously defend” itself, noting that 12 per cent of its US$40 million of supplier spending so far this year has gone to more than 100 minority-owned businesses.