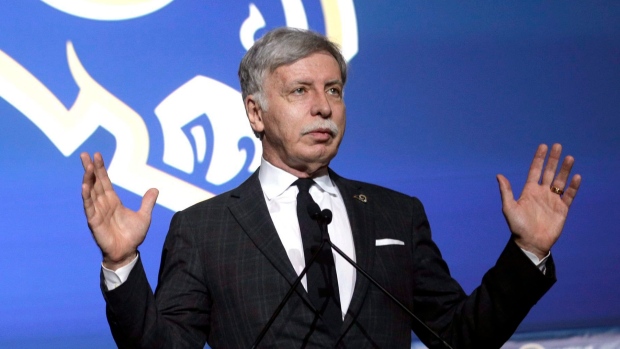 Stan Kroenke, owner of the St. Louis Rams, speaks during a news conference at the Forum in Inglewood, Calif., on Friday, Jan. 15, 2016 , The Canadian Press

The National Football League and the billionaire Rams owner Stan Kroenke agreed to a US$790 million settlement of a lawsuit by St. Louis over the team’s move to Los Angeles five years ago, municipal officials said.

The accord, announced Wednesday, will avert a January trial in which the league was to face claims it violated its own relocation policy by authorizing Kroenke to take the Rams to the west coast. The trial threatened to spill confidential details about NFL finances into public view, including information about Dallas Cowboys owner Jerry Jones and other prominent team owners.

St. Louis officials filed the suit seeking more than US$1 billion in damages, arguing the team’s departure robbed the city and county of tax revenue, including from ticket sales, concessions, earnings and property. St. Louis also alleged it spent US$16 million planning for a new stadium before the Rams defected.

“This historic agreement closes a long chapter for our region, securing hundreds of millions of dollars for our communities while avoiding the uncertainty of the trial and appellate process,” Mayor Tishaura Jones and St. Louis County Executive Sam Page said in a joint statement. Municipal officials “are still determining how settlement funds will be allocated.”

Ellen Moskowitz, Kroenke’s spokeswoman, declined to comment on the deal. Brian McCarthy, an NFL spokesman, praised the efforts “by all the parties to reach a settlement” in an emailed statement Wednesday.

In the run-up to the Los Angeles move, team officials described St. Louis as a “struggling” city lacking the population and resources to support an NFL franchise. The Rams previously played in Los Angeles from 1946 to 1994, moving to St. Louis after the city lost its other football team, the Cardinals, to Arizona in 1988.

Los Angeles, the second-largest television market in the U.S., was without a home football team for two decades until the Rams moved back. They left the City of Angels in 1995 for St. Louis. While in the “Gateway to the West,” Quarterback Kurt Warner led the team to a win in Super Bowl XXXIV over the Tennessee Titans in 2000.

Kroenke and the NFL argued the league’s relocation policy was not a “contract” with St. Louis, but only a guideline, and that owners were free to exercise their “business judgment’ on what was right for the NFL. The NFL and Kroenke failed repeatedly to get the case dismissed and lost a bid to move the trial away from St. Louis due to negative publicity.

At one point Judge Christopher McGraugh fined Jones, New York Giants owner John Mara, Clark Hunt of the Kansas City Chiefs and Robert Kraft of the New England Patriots for failing to turn over financial information that would allow St. Louis officials to refine their claims for punitive damages. Those billionaires served on the league’s relocation committee for the Rams departure.