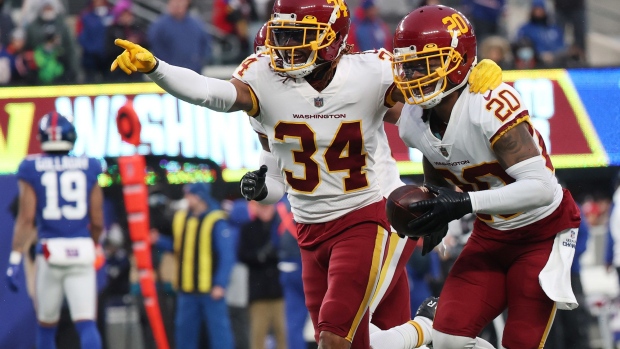 (Bloomberg) -- The Washington Football Team has teased its long-awaited rebranding for months -- but good luck to anyone trying to uncover the NFL club’s new name before next week’s official announcement.

Sports franchises and other businesses resort to extreme measures to keep interlopers at bay ahead of a big trademark announcement. Protecting a new name can mean using innocuous-sounding limited liability companies and registering in far-off nations that don’t have easily searched databases, such as Tonga or Trinidad and Tobago. Cleveland’s Major League Baseball club filed in Mauritius when it renamed the team the Guardians.

“You want to have your decision and branding well thought out instead of having everybody weigh in on it,” said Monica Riva Talley, head of Sterne Kessler’s trademark and brand protection practice. “There’s the element of being able to release it on your own terms and control the message.”

The Washington team is planning a splashy unveiling of the new name on Feb. 2 and has been teasing fans with a video showing sly partial images of its new uniform and helmets that keep its traditional burgundy and gold colors -- but not the name. It’s a critical move to protect the brand for a team that Forbes has valued at $4.2 billion.

While Washington’s path to a new identity is as concealed as the name itself, the use of offshore havens for secrecy is a well-established ritual in American business.

Apple Inc. in 2009 filed an application for a trademark on “iPad” in Trinidad and Tobago with the owner listed as IP Application Development LLC. It filed in the U.S. six months later. Google filed the trademark application for its Pixel phones in Tonga first.

Cleveland’s use of Mauritius in the Indian Ocean would be hard to top, just by distance: The nation is almost 10,000 miles (16,093 kilometers) from the Cleveland stadium that the Guardians will call home.

The Washington football team spent decades fighting to keep its former name – the Redskins – that Native American groups and even a court had ruled was offensive. Faced with threats from its corporate sponsors, owner Dan Snyder finally announced the retirement of the name in July 2020. It’s been temporarily known as the Washington Football Team since.

Critics said the football team should have been prepared to have a new name, considering the long-standing outcry. Instead, it’s a process that’s lasted almost two years, in part because of the difficulty in coming up with an alternative that can be protected by registered trademarks and have a distinct name for websites and social media.

The Washington team’s “Brand Journey” page even has a video explaining the difficulties it’s faced to come up with a new name, especially in clearing trademark rights.

Well-known companies are used to having their U.S. trademark filings scrutinized for insight into future plans, like WalMart Inc.’s potential foray into cryptocurrency or PepsiCo Inc.’s consideration of selling alcoholic beverages. That’s why so many turn overseas to hide their trademark applications until they are ready to make them public.

Applications can be filed in any of the 178 countries that are signatories to the Paris Convention, with six months to file in additional countries to get the benefit of the date of that first filing. The trick is to find a jurisdiction that doesn’t have a database that’s easy to search over the internet. Two of the most popular spots these days are Tonga and Mauritius, said Mark Sommers, a trademark lawyer with the Finnegan law firm.

“They’re ripe for this purpose because the registries can only be searched by hand,” he said.