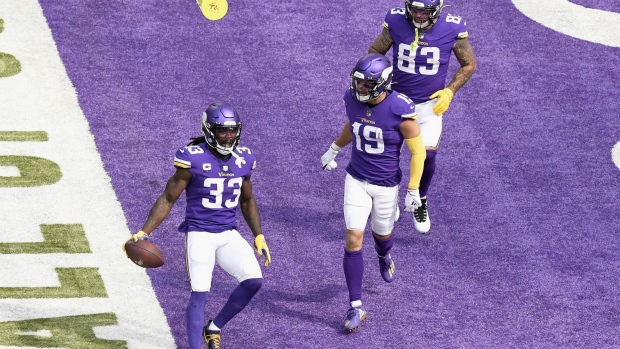 (L-R) Dalvin Cook #33, Adam Thielen #19 and Tyler Conklin #83 of the Minnesota Vikings celebrate a touchdown against the Tennessee Titans by Cook during the first quarter of the game at U.S. Bank Stadium on September 27, 2020 in Minneapolis, Minnesota. , Hannah Foslien/Getty Images North America

Both teams will sit out practices on Tuesday following the test results, in accordance with the National Football League’s virus protocols, the league said in a statement. The Titans defeated the Vikings on Sept. 27, 31-30.

ESPN reported that no Vikings players or personnel have tested positive.

The Titans are scheduled to play the Pittsburgh Steelers on Oct. 4, while the Vikings are slated to face off against the Houston Texans.