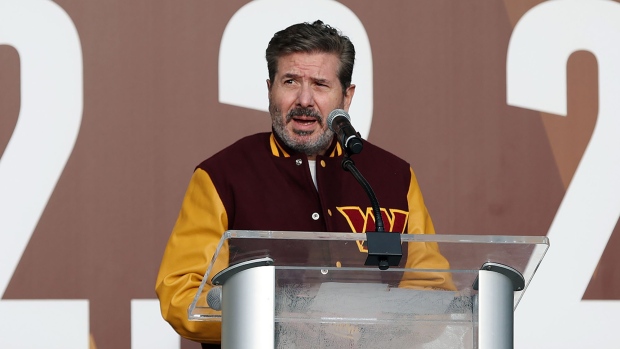 Dan Snyder speaks during the announcement of the Washington Football Team's name change to the Washington Commanders in Landover, Maryland on Feb. 2. , Photographer: Rob Carr/Getty Images

(Bloomberg Law) -- A House committee report slammed the Washington Commanders football team for covering up sexual harassment and misconduct cases inside the organization for decades.

House Oversight Committee Chair Carolyn Maloney (D-N.Y.) released the report Thursday after 12 months of interviews and depositions with former employees. Beyond sexual misconduct, the report alleges that Commanders owner Daniel Snyder was responsible for maintaining a toxic work environment. Snyder was a no-show at a committee hearing in June.

“Our report tells the story of a team rife with sexual harassment and misconduct, a billionaire owner intent on deflecting blame, and an influential organization that chose to cover this up rather than seek accountability and stand up for employees,” Maloney said in a statement with the report.

The report’s release comes as some members of Congress are working to expand workplace protections for employees, including for cases of sexual assault and harassment.

President Joe Biden signed the Speak Out Act Wednesday that would curtail some nondisclosure agreements. He also signed into law earlier this year a measure to change how businesses resolve allegations of workplace sexual harassment and assault,and how such issues are addressed in employment contracts.

NFL Commissioner Roger Goodell during the June hearing endorsed legislation to limit the use of workplace NDAs. But the report released Thursday nonetheless states that the NFL refused to produce more than 40,000 responsive documents.

Snyder sat for a private deposition during the panel’s investigation, but failed to provide a full and complete testimony, the report said.

The GOP leader on the committee, Rep. James Comer (R-Ky.), called the report a “sham investigation” that misused resources. The committee, he said in a statement, wasn’t the appropriate venue for such an inquiry.

“Committee Democrats’ so-called ‘investigation’ into the Washington Commanders only served to deliberately target a private organization, gain cheap headlines, and ignore any information that did not align with their predetermined narrative,” Comer said. “In the 118th Congress, Oversight Republicans will end this charade, return the Committee to its primary responsibilities, and conduct meaningful oversight over the Biden Administration’s self-inflicted crises.”

Legal representatives for the team called the report’s findings “one-sided.”

“Today’s report does not advance public knowledge of the Washington Commanders workplace in any way,” John Brownlee and Stuart Nash, Counsel for the Washington Commanders, said in a statement sent through a media representative. “The team is proud of the progress it has made in recent years in establishing a welcoming and inclusive workplace, and it looks forward to future success, both on and off the field.”

To contact the reporter on this story: Diego Areas Munhoz in Washington, D.C. at dareasmunhoz@bloombergindustry.com

To contact the editor responsible for this story: Martha Mueller Neff at mmuellerneff@bloomberglaw.com

(Updated with comments from Commanders’ attorneys in paragraphs 10 and 11.)