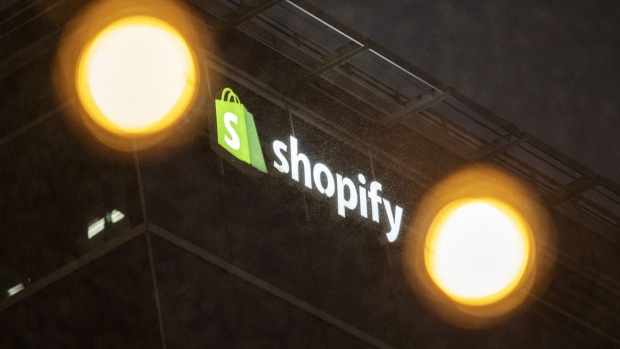 The Shopify headquarters as snow falls in Ottawa, Ontario, Canada, on Sunday, Nov. 22, 2020. Shopify Inc. expects a banner holiday season as the worsening pandemic encourages more consumers to shop online and buy from the small businesses that sell through its platform. Photographer: Justin Tang/Bloomberg , Bloomberg

(Bloomberg) -- Nonfungible tokens have shot to popularity in the past year. Shopify Inc.’s move to facilitate sales might bring them even further into the mainstream.

NFTs have become popular in industries from sports memorabilia to fashion and art, where their ability to provide authentication and uniqueness is prized. Last week, Shopify started allowing merchants on its platform to sell NFTs directly, betting that there’s demand for an alternative to third-party crypto marketplaces. The company aims to win over merchants by giving them more control over the sale and customer relationship, President Harley Finkelstein said on Twitter last week.

Shopify, which offers an all-in-one commerce platform to start and run a business, lets NFT merchants sell directly to collectors through their own storefronts, similar to how other businesses use the platform. The Ottawa-based company hopes to broaden the accessibility of NFTs -- for instance, by allowing payment with credit and debit cards, which some NFT marketplaces don’t currently offer, Vice President of Merchant Services Kaz Nejatian said in an email interview.

With a firm that supports more than 1.7 million businesses globally now in the game, NFTs, which are unique, irreplaceable identifiers created by an algorithm -- like a distinct barcode for a digital piece of art or collectible -- could see another burst of growth.

”We all like convenience” and Shopify makes it easier for people to buy NFTs, said Merav Ozair, an assistant professor of fintech at the Rutgers Business School who specializes in blockchain technology. “NFTs will go more and more mainstream because of Shopify’s existing customer base.”

NFTs exploded into popular consciousness early this year after a series of high-profile sales. Twitter co-foundr Jack Dorsey sold his first tweet for $2.9 million, a video highlight of Lebron James was sold for $208,000 on NBA Top Shot and the artist Beeple sold a digital mosaic for a record-breaking $69.3 million.

There are already signs NFT mania is cooling. The daily number of active digital wallets -- in theory, the number of people who bought and sold NFTs connected to artworks -- plummeted roughly 50% between mid-March and the end of June, according to the market tracker Nonfungible.com.

Shopify will be working closely with every merchant issuing NFTs and performing due diligence to confirm that the merchant has the right to mint the NFTs in question, Nejatian said.

The National Basketball Association’s Chicago Bulls was one of the first Shopify merchants to launch its NFT store -- and provided an early test of how offerings on the platform might be received. The Bulls’ collection of digital artwork featuring the team’s six World Championship rings sold out within 90 seconds, Nejatian said.

Shopify isn’t aiming to compete directly against existing marketplaces like OpenSea and Rarible, which take a more active role in the sales process.

“Artists will be able to own the customer relationship, but they will have more responsibility in also owning the sales process” if they use Shopify, said Alex Svanevik, chief executive officer of blockchain analytics firm Nansen.