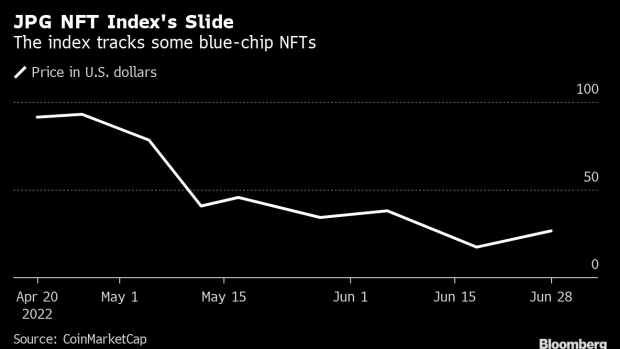 (Bloomberg) -- The market for nonfungible tokens -- such as artwork of bored apes and pudgy penguins -- has been spiraling downward after sales sank sharply and the prices of popular NFTs plummeted over the last few weeks.

The crypto niche is on course to record its first month with under $1 billion in sales since June 2021, according to data tracker DappRadar. On the world’s biggest NFT marketplace, OpenSea, sales volume has fallen 75% since May, and looks set to scrape the lowest levels since July 2021, Dune data shows.

The prices of top-selling NFTs have also slipped. Some Otherdeed NFTs, which were in such high demand at their May launch that they clogged up the Ethereum network, have seen their price floors fall by about 30% in the last 30 days, while the price floor on Bored Ape Yacht Club’s (BAYC’s) blue-chip NFT collection has also fallen nearly 33% in the same time, data from NFT Price Floor shows.

Meanwhile, the JPG NFT Index, which tracks a handful of blue-chip NFT projects, is down by more than 70% since its inception in April.

With all crypto coins tanking in the aftermath of Terra blockchain’s collapsed stablecoin and possible insolvency at lenders Celsius Network and Babel Finance, as well as at hedge fund Three Arrows Capital, investors have been shunning many crypto-related projects. They have also been dumping Ether, which is used to buy much of the world’s most valuable NFTs.

“Without question, the NFT market has fallen off the cliff this June,” said Pedro Herrera, head of research at DappRadar. “While the market is way more mature, it is fair to say that in recent weeks, investors were looking for safer places to put their money amid the Terra collapse and the rumors surrounding potential liquidations.”

Even high-profile acquisitions of NFT platforms -- such as eBay’s deal to buy NFT marketplace KnownOrigin and Uniswap Labs’ purchase of NFT marketplace aggregator Genie -- and recent events like the NFT.NYC conference and Bored Apes’ ApeFest 2022 in New York, have failed to revive investors’ enthusiasm.

“Much of the craziness was bled out of NFTs and they are going through a period of consolidation,” said Aaron Brown, a crypto investor and writer for Bloomberg Opinion. “I suspect they will survive, but on a much more sensible basis than at the height of the mania.”