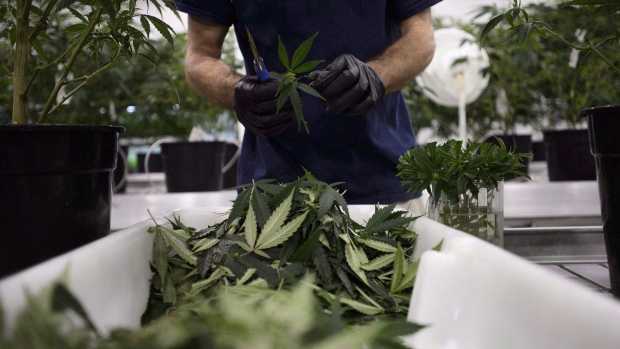 The NHL Alumni Association has signed a landmark agreement with Canopy Growth Corp., that will see the Canadian cannabis company finance one or more studies that could be an important step towards establishing the first comprehensive snapshot of the health of retired hockey players.

Canopy Growth has agreed to cover the costs of a double blind randomized study, which will involve about 100 former players in the Toronto area and take about a year to produce results, according to a person familiar with the matter.

The study will explore whether cannabinoids might help to wean former players off of addictive opioids. If the results of the initial study are encouraging, Canopy Growth has agreed to fund a second study of former players with more subjects.

Dr. Kassam confirmed the watershed agreement to TSN on Friday.

“This is a crystallizing moment,” he said in an interview. “We're going to be using high-resolution imaging, biomarkers, ocular, vestibular testing. We have a big need, the right agenda and the right people. The NHL alumni are willing to commit their privacy and their souls to help others in the community and I think Canopy is the real deal when it comes to the medical science. They have the science. Their facility at Smiths Falls is best in class. It's as good a bio laboratory as you'll find in the world. They are not growing weed in the backyard.”

Dr. Ware said Canopy Growth is motivated by a desire to show the effectiveness of CBD.

“We hear plenty of anecdotes from athletes about how cannabinoids are helping them, but we don’t have any good robust data to prove that and we’re addressing this with a credible partner,” Dr. Ware said in an interview.

Healy will provide Dr. Kassam with the names and contact information of retired NHL players who live in the Toronto area in coming weeks. Dr. Kassam and his research team will then begin to reach out to those players to determine which ones are interested and would be appropriate candidates for the initial study.

Players who participate in the initial study will be examined over a 10-week timeframe and undergo MRI brain scans and diffusion tensor image scans, which are used to construct a three-dimensional map of the brain and help to measure the movement of blood and water in nerve fibres in the complex organ. Abnormal flows of blood and water can signal injuries.

The subjects will also fill out questionnaires about their physical and mental health, including whether they use opioids or other drugs and whether they self-medicate. They will also have blood tests and be provided with iPads installed with software that measure speech and writing patterns, test memory and monitor emotional state.

Study subjects, for instance, will use software that requires them to read different stories aloud each day. The software then records and analyzes their speech patterns to look for signs of cognitive impairment. The subjects are also asked to recall the specifics of various stories they’ve read over the past days and weeks to help evaluate their recall ability.

Of the 100 players anticipated to participate in the study, 20 would be given a placebo and 80 would receive CBD pills to be taken twice daily over 10 weeks. The double-blind study means that neither doctors nor the trial subjects would know which players received the placebos and which received the CBD until after the study is completed and the results compiled. The study would explore whether CBD use helps to ease anxiety, depression and pain in the study subjects.

Bruce Linton, founder, chairman and co-CEO of Canopy Growth, discusses why his company's operating expenses ballooned to almost $170 million from $42 million a year earlier and why his employees aren't allowed to invest in other pot companies.

CBD is derived from the cannabis, or marijuana, plant. Unlike marijuana, CBD doesn’t have THC, the psychoactive ingredient that gives a user a “high.”

Its proponents say CBD can help treat problems such as inflammation, anxiety, insomnia, depression, chronic pain and even post-traumatic stress, although the science supporting those claims remains inconclusive.

Researchers will also examine the blood tests of the former players to find biological signals, known as biomarkers, which could one day provide clear evidence of brain injuries.

Biomarkers are a relatively new science and can help to inform doctors about whether a patient has a disease or injury. For instance, abnormal levels of proteins in the blood may be considered markers of Alzheimer’s disease. Doctors are still trying to find reliable markers for traumatic brain injuries and diseases like Chronic Traumatic Encephalopathy or CTE.

Officials with the NHL Alumni Association are still negotiating with Toronto-area medical research facilities to determine where the testing will take place.

Canopy Growth, whose headquarters are in Smiths Falls, Ont., is an industry trailblazer. It was the first pot company to sell shares to the public, the first to reach $1 billion in market value and has introduced products such as oral cannabis sprays and pre-rolled joints.

The company operates 10 licensed marijuana and hemp production sites and in its most recent financial quarter, from October to December 2018, Canopy Growth reported it sold 7,381 kilograms of recreational cannabis and 1,611 kilograms of medical cannabis. Canopy Growth announced a partnership with Martha Stewart this week to produce cannabis products for pets.

Current and former athletes self-medicating with opioids and other prescription drugs has become a hot-button issue in recent years.

A study published in the Clinical Journal of Sport Medicine last year reported 26.2 per cent of retired National Football League players said they had used prescription opioids within the prior 30 days. Almost half of those players said they didn’t use the medication as prescribed.

Another study, published in 2011 by Washington University School of Medicine in St. Louis, reported 7 per cent of retired players said they had misused painkillers during the month before they’d participated in the study.

No similar study has ever been conducted of former NHL players. Both the NHL and the NHL Players’ Association at different times have blocked proposals to research the health of retirees and some NHL team owners have been noncommittal about whether they would support such science.

In an Aug. 28, 2015, deposition related to the NHL concussion lawsuit, Nashville Predators co-owner Thomas Cigarran testified that he doesn’t believe the NHL has a legal or moral obligation to study the link between repeated head trauma and long-term brain injuries.

“I think it might be smart business to find out to the extent possible if there are these issues and problems that are created,” Cigarran testified.

Rick Westhead is TSN's Senior Correspondent and has covered hot-button issues including the NHL's concussion protocols and sports labour relations and has written various historical long reads for TSN.ca. Find more of his work here.