Normally we would be jam packed: Alberta bar owner missing out on NHL playoff revenue

That’s the case when looking at the 21 publicly traded companies with naming rights to arenas used by NHL teams. Shares of such companies have returned an average of 23 per cent in 2021, outperforming the S&P 500 by 9.3 percentage points and the S&P/TSX Composite by 6 points.

Companies in the airline and finance industries are well represented in the group. United Airlines Holdings Inc. and American Airlines Group Inc. are sponsors for the homes of the Chicago Blackhawks and Dallas Stars, while Wells Fargo & Co. and Prudential Financial Inc. have their names on venues in the Northeast. Fourteen of the 21 companies have returned at least 20 per cent this year.

The worst performer of the group is Madison Square Garden Entertainment Corp., whose main business is the arena itself. That underperformance is likely due to its planned acquisition of MSG Networks Inc., but the fact that the New York Rangers were average did little to help sales (at least the NBA’s Knicks made a playoff cameo).

Of course, it’s hard to argue the NHL connection is the key to the rally. Airlines stocks have been key beneficiaries of the reopening trade and surge in demand for travel. Banks have done even better amid optimism about U.S. economic growth.

The NHL’s semifinals started June 13, when the New York Islanders beat the Tampa Bay Lightning 2-1 and on Monday evening, the Vegas Golden Knights beat the Montreal Canadiens, 4-1. While stocks that are tied to NHL arenas are red-hot, there’s no correlation for the teams still alive for the Stanley Cup.

The Golden Knights are the only team remaining that played all of its home games at an arena with ties to a publicly traded U.S. company, T-Mobile US Inc. Amalie Oil Co., a closely held company, has naming rights for the home of the Lightning, while the Canadiens play at Bell Centre, a stadium with ties to BCE Inc.

The Islanders fully returned to Nassau Coliseum in Long Island this season after splitting games between that stadium and Brooklyn’s Barclays Center the previous two seasons. The team will take on the Lightning on June 17 and 19 at the Coliseum, which is slated to undergo a partial demolition. The Islanders will eventually play in a new facility nearby named for UBS Group AG.

The rise in stocks that pay for naming rights could go either way for Starbucks Corp., which has filed new trademark applications that could let it use its name on a stadium, entertainment space or sports training facility. The coffee giant is up 5.1 per cent this year. 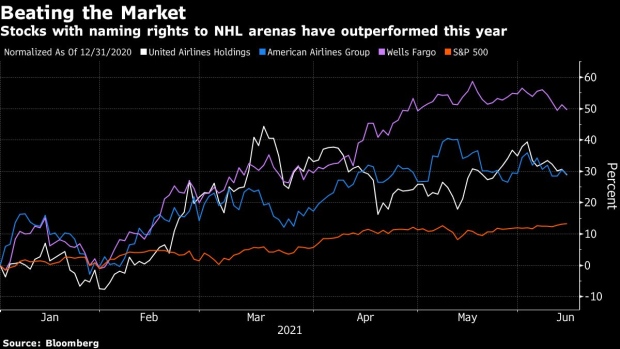 Stocks with their names on NHL arenas are doing better than their NBA counterparts. The 11 companies that have their name on an NBA-only arena -- excluding those shared by NHL and NBA teams, like Toronto’s Scotiabank Arena -- have returned 12 per cent, lagging behind the S&P 500 by 1.9 percentage points.