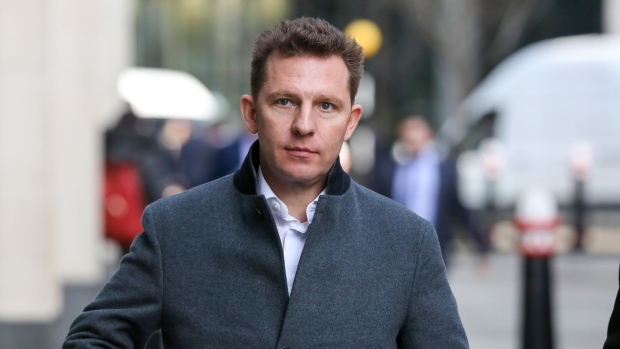 Nicholas Candy, co-founder of Candy and Candy Ltd., arrives at the High Court in London, U.K., on Thursday, March 2, 2017. Candy attended court to give evidence in a lawsuit being bought by Mark Holyoake. , Bloomberg

THG rejected a proposal of 170 pence a share from UK e-commerce investor Belerion and US hedge fund King Street Capital Management that valued the company at 2.1 billion pounds ($2.6 billion). The offer “significantly undervalued the company,” THG said in a statement. The stock closed at 116.45 pence on Thursday in London trading.

Separately on Thursday, Candy Ventures Sarl said it is considering an offer. It’s not certain an offer will materialize, or what its terms would be, according to a statement from the entrepreneur’s holding company. The process is in its very early stages, Candy said. UK property developer Candy failed in a bid for Chelsea Football Club earlier this year.

Candy has some experience investing in technology companies. He built up a stake in podcasting platform Audioboom Plc, which has been the subject of takeover speculation, as well as scooping up augmented reality startup Blippar after it went into administration.

Belerion founder and chief investment officer Iain McDonald is a non-executive director on THG’s board.

Manchester, UK-based THG said last month it had received approaches from parties looking to acquire the online shopping emporium, but none were acceptable.

The company, which sells beauty, skincare and health-food products and was co-founded by Matthew Moulding, has endured a tough time since going public. Investors have grown increasingly concerned about corporate governance and the growth prospects of its Ingenuity unit, a platform which helps brands sell their products online. THG has said the business is grappling with a marked increase in raw material costs, particularly whey and freight prices.

Formerly known as the Hut Group, the retailer was founded by Moulding and John Gallemore, who now serves as chief financial officer, in 2004. It started off selling CDs.

Moulding has kept a tight grip on THG as a major shareholder, landlord, chairman and chief executive officer. In March, THG appointed Charles Allen as chairman, with Moulding relinquishing the role to focus on being CEO. Moulding also pledged to give up his golden share, which allows him to veto a takeover, smoothing the way for THG to move its listing to the premium segment of London’s Stock Exchange. Last year, Moulding hinted that he could take the business private.

Speculation over THG’s future has weighed on its stock in the past year. SoftBank Group Corp., a major investor, has yet to indicate if it will exercise an option to buy a 20% stake in Ingenuity. In September, THG said it would list its beauty unit in 2022 and that it was considering the same for the nutrition business. That led investors to scrutinize Ingenuity, raising questions about its value.