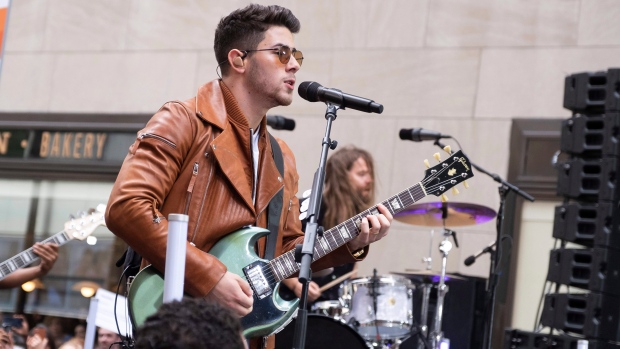 The newest name to enter the bottle-strewn field of celebrity-backed spirits: Nick Jonas.

On Thursday, Aug. 29, the singer and his friend and collaborator, designer John Varvatos, will introduce Villa One tequila to the U.S. The spirit, made in partnership with Stoli Group LLC USA, will make its debut at the Villa One Lounge at the Jonas Brothers’ Happiness Begins Tour at Madison Square Garden. Those without concert tickets will be able to buy Villa One in New York starting in early September at bars, restaurants, and liquor stores. The tequila will arrive in a handful of other major cities later in the month and be available nationally in the first quarter of 2020.

The partnership started at a Roc Nation dinner at the Soho House in New York around 2016, when Varvatos and Jonas were seated together and bonded over their appreciation of tequila. “Tequila is the cleanest spirit I’ve found that I can drink,” says Jonas, who is diabetic. (The natural sugars in agave don’t spike blood sugars, according to some studies.)

Unlike the majority of friendships “that start over tequila,” this one has been productive, resulting in JV x NJ, a fashion line and a fragrance, and now Villa One. Jonas had previously been approached by Stoli Group for another spirit project that he turned down; he came back to them with this idea.

Jul.25 -- Ivan Menezes, chief executive officer of Diageo Plc, discusses the distiller's plan to return as much as 4.5 billion pounds ($5.6 billion) to shareholders. He also comments on whisky, gin, tequila sales and Diageo's brand acquisition strategy in an interview on "Bloomberg Surveillance."

“Nick and John approached Stoli Group to tap into the spirits organization’s experience, resources, and distribution network with the idea to create Villa One, and we felt this was the right time for us and the right addition to our portfolio,” says Rudy Costello, acting global president and chief executive officer. He says that while vodka will always be the company’s top priority, it’s frequently evaluating emerging categories, such as super-premium and ultra-premium tequila. He won’t disclose distribution numbers but says that because it owns its own distillery, it can manage demand. “We have long-term aspirations to compete with the top five tequilas in the ultra-premium sector,” he says.

Villa One comes in three styles—silver, reposado, and añejo—in austere bottles designed by Varvatos. The tequila is made with sustainably sourced 5- to 7-year-old 100 per cent blue weber agave. The spirit was created by master distiller Arturo Fuentes of the Fabrica de Tequilas Finos in Tequila, although, according to Varvatos, Jonas and he participated in “marathon tastings of the product, tables full of glasses.”

“The misstep bible is a big one,” says Jonas. But he admires the job Reynolds is doing. “He’s passionate and having fun with it and takes the time and makes the effort to speak to the audience,” he says. “And the juice is good.”

The premium tequila and mezcal sector has been a high point in a category that’s been hit by the decreasing drinking habits of millennials and Gen Z.  Innovation in premium tequila and mezcal and increased demand in the U.S. have pushed up worldwide consumption 5.5 per cent in 2018, according to the drink market analyst group IWSR. The category is projected to grow 4 per cent year over year through 2023.

Which makes the pop star power of Jonas appealing: He can market the product to the Jonas Brothers fan base, past and present—at least to the ones who can legally imbibe. “Me and my friends drink tequila to celebrate something the way people used to drink Champagne,” he says.

Here are notes on the spirits from a preview tasting on a Friday morning at 11 a.m. (“the life of a rock star,” Jonas jokes). Bottle prices are approximate.

Silver (US$45): Smooth and easy to sip, the spirit has enticing hits of dried fruit. “Most silver tequilas are used in mixed drinks. We wanted one that you could happily sip with the right, fruit finish,” says Varvatos.

Reposado (US$50): Six months of oak barrel aging adds a round caramel finish to the golden spirit. Jonas adds a slice of orange to his drink, which gives it a sweet citrus punch. It’s the tequila he says he drinks the most, and it’s the favorite of his wife, actress Priyanka Chopra. “We’ve had Villa One backstage for our guests, friends, family,” he says. “Reposado is the one that’s always gone. I’ve starting hiding it.”

Añejo (US$60): The intense spirit is aged in American barrels for 18 months and packs a big, boozy, oaky punch.  “This is the good, end-of-the-night, one-and-done,” says Varvatos. Jonas says it’s his drink of choice with a cigar.

Asked who was the more dedicated tequila drinker, Jonas said Varvatos had a few more years on him. “I went through a crappy tequila phase,” says Varvatos. “By the time Nick started drinking, that kind of firewater tequila had disappeared from the market.”