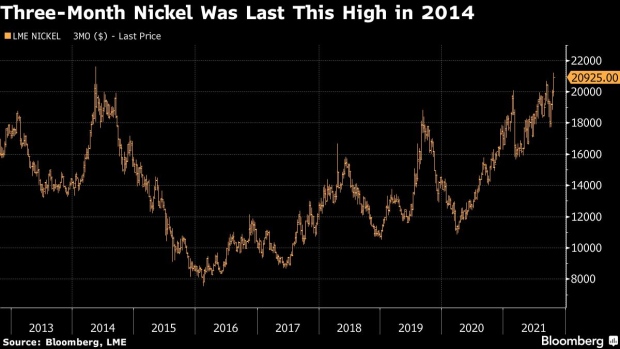 (Bloomberg) -- Nickel in London rose to a seven-year high after Vale SA cut its guidance for nickel output due to a strike at its Canadian mine.

Vale’s production of the metal used in kitchenware and electric car batteries will likely reach 165,000 to 170,000 tons this year, compared with a previous projection of 200,000 tons, the company, one of the world’s top nickel producers, said Tuesday.

The Southeast Asian nation indicated last month that it plans to either ban or tax exports of semi-processed products used to make stainless steel in an effort to keep more of the industrial metal in the country to support a domestic industry focused on electric-vehicle batteries.

Indonesia has been known to reverse its own policies since the first export ban on unprocessed mineral products in 2014, BloombergNEF analyst Allan Ray Restauro said in a note. Exports were permitted again in 2017, but only to companies with operational smelters. The ban on exports was then brought forward two years early to 2020.

BloombergNEF expects the nickel price to remain elevated above $18,000 a ton, although it will continue to underperform compared to copper and aluminum. Should Chinese steelmaker Tsingshan Holdings Group Co. be successful in producing nickel matte from nickel pig iron, there should be downward pressure on price as supply risks ease. Tsingshan made extensive investments into Indonesia’s metals and mining sector after the nation banned exports of raw nickel ore in 2014.