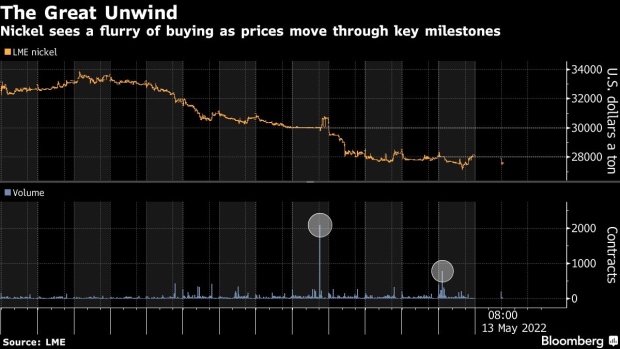 (Bloomberg) -- The nickel tycoon at the center of a historic squeeze earlier this year has covered more of his short position in recent weeks, reducing the total bet by more than half since the crisis roiled the metals world.

Xiang Guangda and his Tsingshan Holding Group Co. bought contracts in the market to reduce his short bet by about 10,000 lots, or 60,000 tons, mainly in the last two weeks as nickel prices retreated, according to people familiar with the matter. The tycoon is exploring other ways to offset the position, including by sourcing third-party metal that meets the specifications for delivery to LME warehouses, said the people, who asked not to be identified discussing private information.

The latest reduction in its large short position has helped reduce cash flow stress on the world’s biggest nickel producer and eased pressure for its banks, which had agreed not to make further margin calls on the position. It also begins to remove a key overhang for the LME and its nickel market, which has been stuck in an extended limbo of low volumes and liquidity since the crisis.

Nickel, which is used to produce stainless steel and in rechargeable batteries, spiked to more than $100,000 a ton on March 8 before the LME suspended trading and canceled billions of dollars of transactions at the highest prices. The market reopened with new daily price limits in place and after Xiang reached the standstill deal with his banks, but volumes remained well below normal levels even two months later.

Trading has accelerated, however, as prices retreated in the past couple of weeks, dragged down by a broad sell off in metals triggered by worries about the global demand outlook. The additional buying volume has lent support during the downswing in metals markets, with a flurry of activity seen as prices hit key levels including $30,000 and $28,000.

Xiang earlier covered about 20% of his short position after a drop in prices below $30,000 a ton triggered a flurry of nickel trading in mid-March, Bloomberg reported at the time. Based on Tsingshan’s total position of over 150,000 tons when the market was halted on March 8, the latest covering would suggest a remaining short position of about 60,000 tons.

To further offset the position, Tsingshan has held talks with refined nickel suppliers to buy metal that could be delivered to LME warehouses, the people said. Despite being the world’s largest producer, the company makes different forms of nickel that don’t meet the exchange specifications for delivery when short positions are held to expiry. At the same time, refined nickel is in tight supply -- inventories in LME warehouses currently stand at about 73,000 tons.

Tsingshan has yet to make any deliveries but the talks with other suppliers are progressing, the people said.