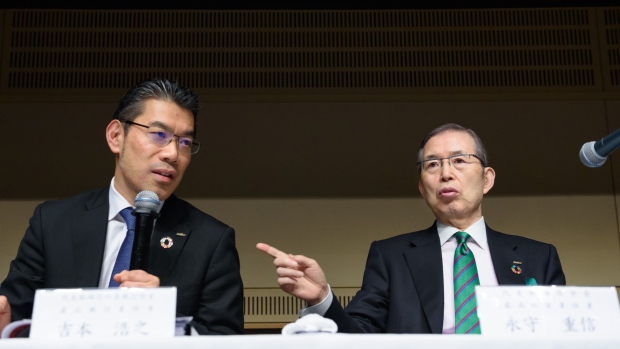 (Bloomberg) -- After handing over the reigns in June, Nidec Corp. founder and former Chief Executive Officer Shigenobu Nagamori is unimpressed with the manufacturer’s recent profitability and stock-market performance, going as far as to say the world’s top maker of mini motors is facing its biggest-ever business crisis.

Nagamori, 77, recently told his senior managers that they need to do more to boost Nidec’s business performance and share price, a person familiar with the matter said. Nagamori is known to regularly send such messages to employees of the company he founded in a shack in 1973.

Nagamori told them to aim for operating profit of at least 95 billion yen ($863 million) in the first half of the fiscal year ending March, an increase of 37% from the same period a year earlier, the person, who spoke on the condition of anonymity, said of Nagamori’s admonition to an internal audience. The target would put the company slightly ahead of its forecast to reach profit of 80 billion yen in the first half and 180 billion yen for the year.

Read more: The World’s Top Maker of Mini Motors Bets It Can Win Over Tesla

Nagamori, who has built up a reputation over the years as a tough and demanding leader, warned that if this objective it not achieved, faith in the company’s new management will crumble. He said he would do whatever it takes to support the CEO, Jun Seki, in achieving the goal. Almost half a century after founding Nidec, Nagamori, who remains chairman, handed over leadership to the former Nissan Motor Co. executive earlier this year and tasked him with leading the company’s ambitious pivot into the electric-vehicle space.

Nothing has changed in regard to Nagamori being involved in management as chairman, founder and largest shareholder, a spokesman for Kyoto-based Nidec said.

The founder’s recent comments highlight a level of uncertainty regarding Nidec’s post-Nagamori future. During his days as CEO, Nagamori was regarded as one of Japan’s best deal-makers. Analysts had warned before he stepped down that if the transition of power wasn’t smooth, Nidec could lose its “Nagamori premium.”

The former boss has always maintained extraordinarily high standards for his company --and his successors. Nagamori had set a goal for Nidec to become Japan’s fifth largest enterprise in terms of valuation in 2023, to mark the 50th anniversary of the company’s founding, according to a person familiar with the matter. Nidec’s market capitalization is currently about 8 trillion yen, landing it in 13th place, data compiled by Bloomberg shows.

Before Seki, another former Nissan employee, Hiroyuki Yoshimoto, was promoted to Nidec president in 2018. Two years later he was demoted to vice president and left the company shortly after.

For the recent April-June quarter, Nidec reported operating profit of 45 billion yen. To achieve Nagamori’s first half goal, Nidec would have to turn out 50 billion yen in operating profit for the current July-September period. Analysts, on average, are forecasting 47 billion.