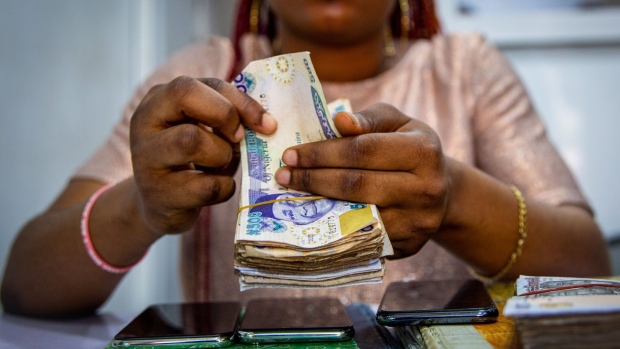 A vendor counts out Nigerian naira banknotes inside a shop at the Ikeja computer village market in Lagos, Nigeria, on Monday, March 29, 2021. Nigerians are having to contend with the highest inflation rate in four years, the second-highest unemployment rate on a list of 82 countries tracked by Bloomberg, and an economy that’s only just emerged from recession. Photographer: Adetona Omokanye/Bloomberg , Bloomberg

Nigeria’s central bank devalued the naira by 7.6% against the dollar as authorities in Africa’s biggest oil producer migrate toward a single exchange-rate system for the local currency.

The Abuja-based Central Bank of Nigeria replaced the fixed rate of 379 naira to a dollar used for official transactions with the nafex or the I&E exchange rate of 410.25 naira per dollar, according to data on its website on Tuesday.

The unification of the two rates will improve the country’s currency-management system and help meet the conditions of the International Monetary Fund and investors for transparency. Nigeria had adopted multiple exchange rate regime to avoid an outright devaluation of the naira. The nafex, which acts as a spot rate, was introduced in 2017 to improve dollar liquidity and encourage inflows from foreign investors that were exiting the country following the 2016 economic crisis.