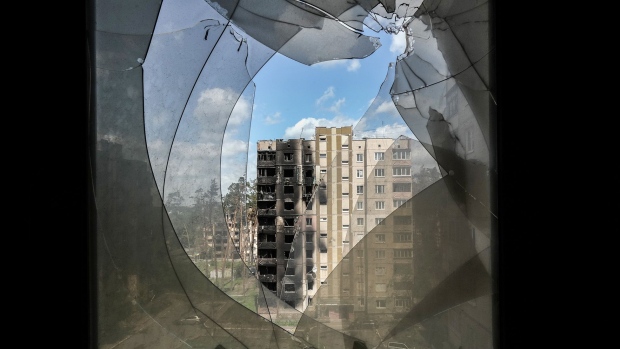 Buildings destroyed during the Russian invasion wait to be renovated or demolished on May 26, 2022 in Irpin, Ukraine , Photographer: Christopher Furlong/Getty Images

The Nigerian National Petroleum Corp. spent 521 billion naira ($1.26 billion) on subsidies in March, a 97% increase from February, according to data published by the company on Thursday. Total expenditure in the first three months of the year was 982 billion naira, the same figures show.

The state-owned energy firm ramped up imports in March to 2.06 million tons of the fuel, compared with 1.32 million tons in February and 1.35 million tons in January. That’s after a supply disruption caused long queues at fuel stations in the West African nation.

The subsidy combined with sluggish crude output mean high oil prices are sapping rather than boosting public finances in Africa’s biggest economy. Lawmakers last month amended the government’s budget to increase the sum set aside to fund the subsidies to $9.6 billion.

Nigeria has very little refining capacity, prompting the NNPC to import all its gasoline, mainly via crude-for-fuel swaps with traders, which the state-owned firm sells at a steep loss to retailers and wholesalers. That makes pump prices in Nigeria among the lowest in the world, at 162.5 naira a liter.

The price of crude has surged since Russia invaded Ukraine in late February, with Brent rising to a high of $133.89 on March 8.

The NNPC, which is supposed to send excess funds each month to a pool that finances the federal and state governments in Africa’s most-populous country, didn’t do so between January and April, deducting about two-thirds of its revenue to support the subsidies, according to company data.