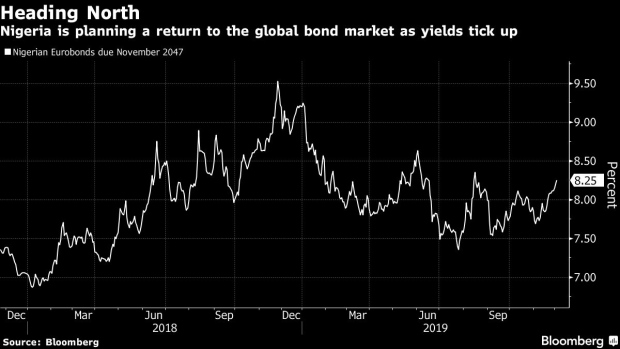 Zainab Ahmed, Nigeria's former finance minister, speaks during a panel session at the Emerging + Frontier Forum 2019 at Bloomberg's European headquarters in London, U.K., on Tuesday, June 25, 2019. Rocked by trade disputes, the possibility of a U.S. recession and the ever-present threat of political conflagration, the backdrop for emerging and frontier markets has rarely seemed less settled. Photographer: Luke MacGregor/Bloomberg , Bloomberg

Nigeria may offer Eurobonds as early as the first quarter of next year after staying out of international debt markets this year.

“We have to do it quickly because we want to make sure we have enough funds for the implementation of the budget,” Finance Minister Zainab Ahmed said in an interview on the sidelines of a regional International Monetary Fund conference in Dakar, Senegal, on Monday.

The amount the government offers will be determined by how much it raises from concessional lenders such as the African Development Bank, she said. “What we’re not able to get in concessionary loans, we’ll go for the commercial window. Eurobond is one option.”

Africa’s top oil producer issued a record $10.7 billion of international bonds in 2018, and some investors were betting it would sell more this year to cover its widening budget deficit. The nation’s debt management office in October ruled out further sales in 2019.

Nigeria’s economy is expected to expand 2% this year, a far cry from average growth of 7% a year in the decade prior to its recession in 2016. Bank of America Merrill Lynch said in September it expected the government to issue at least $2.6 billion in Eurobonds in the last quarter of the year, before the state ruled out further borrowing for this year.

--With assistance from Alonso Soto.

To contact the reporter on this story: Katarina Hoije in Abidjan at khoije@bloomberg.net