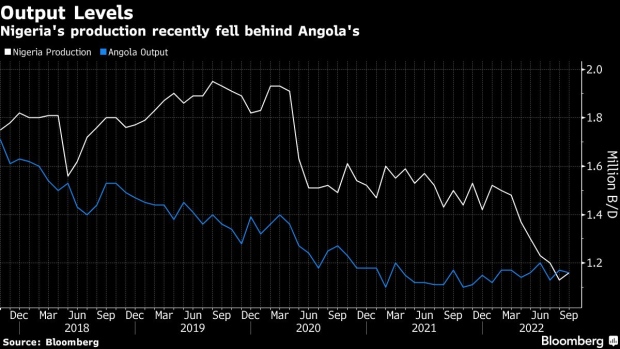 (Bloomberg) -- Nigeria will need higher investments along with tighter security to help revive production in the oil-rich Niger Delta, a senior executive at Oando Plc said.

Africa’s long-standing top oil producer recently fell behind Angola as output has been hit by vandalism and theft in the delta, and the exit of international companies. The government is putting together law enforcement teams and leading community outreach campaigns in an effort to reverse the drop.

“Investment has to go back into the Niger Delta” as development of offshore fields is needed, Oando’s Chief Operating Officer Alex Irune said in an interview in Cape Town Wednesday.

Companies in the Niger Delta have been dealing with vandalism for years. The severity is demonstrated by the 180,000 barrel-a-day Trans-Niger Pipeline that’s run dry. As little as 5% of capacity was used between October 2021 and February, according to an industry union.

Surveillance has started in order to intercept illegal activities and refineries, said Irune. “There’s gradual improvement,” he said. But halts in production usually mean returning to previous levels of output can take a long time, he said.

Oando has output capacity of about 43,000 barrels of oil equivalent a day. It has also added a clean energy unit, and is looking at solar-focused projects in Abuja along with opportunities to utilize geothermal energy, Irune said.

“From our perspective we’re firmly aligned with net-zero targets that are set globally but we believe that Africa will take a different journey slightly,” he said.