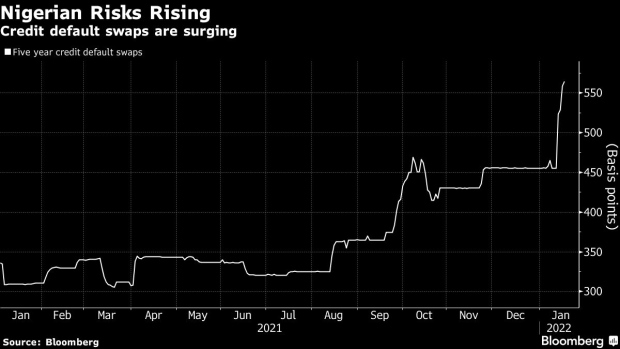 Stack towers at the under-construction Dangote Industries Ltd. oil refinery and fertilizer plant site in the Ibeju Lekki district, outside of Lagos, Nigeria, on Friday, March 6, 2020. Aliko Dangote, Africa’s richest man, plans to spend more than his net worth of $13.5 billion building one of the world’s biggest oil refineries. Photographer: Tom Saater/Bloomberg , Bloomberg

The cost of insuring the nation’s dollar bonds against default jumped to the highest since October 2020 this week after Africa’s largest crude producer delayed plans to cut expensive gasoline subsidies by 18 months.

The decision to delay the subsidy cuts could deprive the country of up to 3 trillion naira ($7.2 billion) in lost income from oil and gas over 12 months, according to the World Bank. The state energy company is currently absorbing the spiraling costs of keeping the pump price steady, which is eroding its capacity to finance the government.

Deferring the reforms will make Nigeria’s budget deficit balloon even further if -- as the government has signaled -- this year’s spending plan is amended to include gasoline subsidies beyond the current limit of June, said Razia Khan, head of research for Africa and the Middle East at Standard Chartered.

Africa’s largest economy will likely significantly surpass its projected deficit of 6.39 trillion naira, or 3.46% of gross domestic product, this year. The country also exceeded last year’s projected deficit, according to a presentation by Finance Minister Zainab Ahmed earlier this month. Through November 2021, the West African nation borrowed about 56% of its 12.6 trillion naira spending, she said.

Compounding the impact of the subsidies is Nigeria’s dwindling crude output, leaving the nation unable to meet its quotas under a pact with the OPEC+ alliance. As of November 2021, the country was pumping at least 500,000 fewer barrels a day than its capacity, according the Nigerian Governors’ Forum, a body representing the interests of the 36 state governments.

Oil earnings were only a little over half the government’s target in the first 11 months of last year, bringing in just 970 billion naira.

The fiscal outlook in Africa’s largest economy does not look good as it’s unlikely to benefit even if crude prices remain high.

“If oil prices rise further on geopolitical risk, then Nigeria’s spending on the subsidy will also rise,” Khan said.