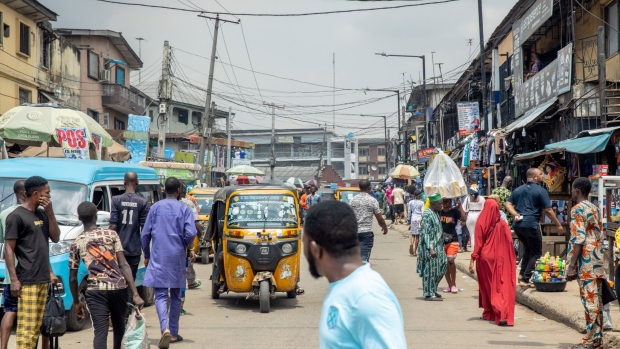 (Bloomberg) -- Nigeria raised its domestic and foreign borrowing requirement by 15% to fund a record budget deficit, piling pressure on the debt-servicing burden in Africa’s biggest economy.

President Muhammadu Buhari is scheduled to announce the government’s 2023 spending plans on Friday. Finance Minister Zainab Ahmed in July presented a proposal to spend 19.8 trillion naira next year, compared with 17 trillion naira in 2022.

The new loans will add to Nigeria rising debt-service costs, which already exceeded revenue in the first four months of this year and could reach 102% of government income by end of 2022, according to the World Bank. Yields on the OPEC+ member’s longest-tenured 2049 bond having risen by more than 500 basis points since the start of the year to trade at 13.98% on Wednesday.

Nigeria has missed its revenue targets in recent years as rampant theft of crude reduced output to a record low in Africa’s biggest producer. The government achieved only 39% of its targeted oil income in the four months through April, according to the nation’s budget office. High fuel-subsidy costs, which the office estimates will total 6.7 trillion naira next year, are also depriving the country of much needed income.

Removing the fuel subsidies, in addition to other economic reforms, are critical to ensuring Nigeria’s fiscal sustainability, investment bank EFG Hermes said in a research note on Thursday.

The lawmakers projected that the government will earn revenue of 9.4 trillion naira, based on an average oil price of $73 per barrel and an exchange rate of 437.57 to the dollar. Brent crude for December settlement traded at $93.65 per barrel on Thursday morning, while the Nigerian naira traded at 437.18 against the US currency.