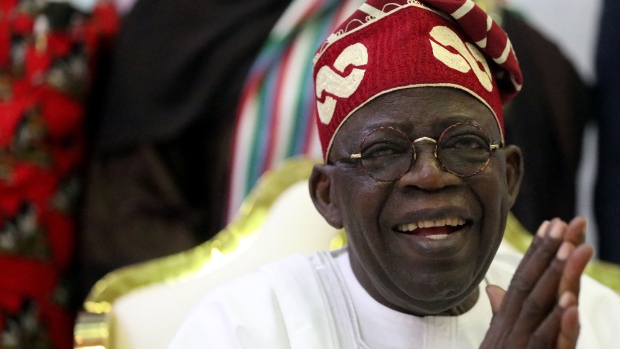 (Bloomberg) -- The presidential candidate of Nigeria’s ruling party will double the number of police officers and ramp up the size of the military in the West African nation if he wins elections in February.

“To prosper at home in peace and stability, Nigeria needs to uphold its national security, unity, territorial integrity, sovereign independence and safety,” Bola Tinubu, who is running for the ruling All Progressives Congress to succeed President Muhammadu Buhari in next year’s vote, said Monday at Chatham House in London.

Buhari, a former military general, won his first term in 2015 and promised to tackle rising insecurity caused by jihadists in the north of the country. With less than eight months to the end of his tenure in May, violence has spread throughout Africa’s most-populous nation, with armed groups frequently carrying out mass abductions and killings.

The security forces are spread thin trying to contain the established Islamist insurgency as well as other threats that have emerged.

Asked how his government would address the situation, Tinubu delegated the question to Nasir el-Rufai, a political ally and governor of Kaduna state, one of the places most impacted by insecurity. Nigeria’s current contingent of 300,000 police officers for a population of more than 200 million will double, while the 200,000-strong armed forces will also grow significantly under Tinubu, El-Rufai said.

“The numbers, the equipment, the skills and the training of the armed forces will be scaled up, will be increased rapidly, to meet the asymmetric nature of the security challenges we face,” El-Rufai said. “What we are facing in Nigeria today — banditry, terrorism, separatism and oil theft — requires a new approach toward security.”

The US should reconsider legislation that limits military assistance to foreign security forces suspected of human-rights abuses, said Femi Gbajabiamila, another ally in the APC who is the speaker of the House of Representatives.

Such rules “deprive Nigeria and some other countries of utilizing armaments that are manufactured in the United States,” Gbajabiamila said. “You cannot on the one hand condemn terrorism and on the other hand make it difficult for Nigeria to get arms from those countries. It’s a no-brainer.”

Tinubu also said his administration would aim to double the size of the Nigerian economy in a decade. “Budgeting will be based upon the projected spending level needed to push the annual growth rate above 7%,” he said.

A similar expansion in spending since 2015, financed mainly by debt, has failed to drive growth as the economy expanded by an average of just 1.1% from 2015 to 2021, according to the World Bank. That has left Africa’s largest economy on the verge of a fiscal crisis with the cost of debt-servicing forecast to surpass government revenue by the end of the year.