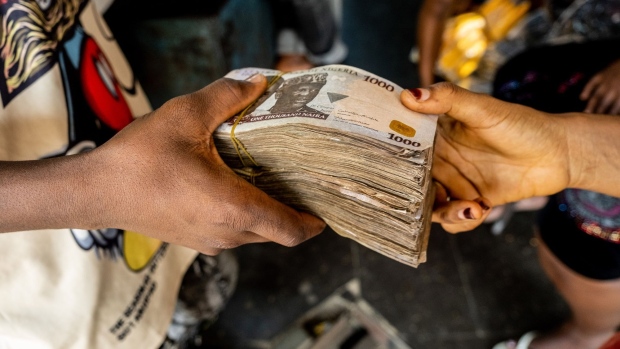 A customer hands over bundles of 1000 Naira banknotes to a trader inside a market in Lagos, Nigeria, on Friday, April 22, 2022. Choked supply chains, partly due to Russia’s invasion of Ukraine, and an almost 100% increase in gasoline prices this year, are placing upward price pressures on Africa’s largest economy. Photographer: Damilola Onafuwa/Bloomberg , Bloomberg

(Bloomberg) -- Nigeria’s currency fell to the lowest on record after traders adjusted prices to reflect the rate Central Bank of Nigeria sold the currency amid a lack of dollar supply in the authorized foreign-exchange market.

The naira retreated 1.6% to 426.26 a dollar as of 3.30 p.m. local time on the investors and exporters window, also known as Nafex, in Lagos. The Nafex is regarded as the official market for foreign currency transactions in Africa’s biggest economy.

Pressure on foreign reserves, which is down 3.4% since the beginning of the year, despite higher oil prices in Africa’s largest crude producer, has forced the central bank to cut down on dollar sales, creating scarcity of the greenback on the market.

The Abuja-based bank did not sell dollars to foreign portfolio investors last week, making many local buyers to source their own foreign-exchange from alternative sources, local investment bank Chapel Hill Denham said in an investment note Monday. “While we are yet to understand the reason behind this, we believe the persisting declines in FX reserves might have triggered CBN’s restraint to supply FX last week,” it said.

The dollar scarcity is creating a black market boom, where the naira is exchanging at a record low of 615 to the dollar, giving a spread of 44% on the the official rate. Last month, MSCI Inc. said it’s considering a downgrade of the MSCI Nigeria indexes to standalone markets status from frontier market due to persistent foreign-exchange shortages.

The naira’s fall “may only point to partial and gradual convergence to higher spot levels at CBN FX sales,” said Samir Gadio, head of Africa Strategy at Standard Chartered Bank. “The CBN is already selling USD in spot at 450-465 at its secondary market intervention sales auctions,” he said in emailed response to questions.

The Abuja-based central bank has devalued the currency three times in the last two years as it succumbs to demand pressure amid worsening scarcity of the greenback in the continent’s most populous nation. It has a backlog of about $1.7 billion in unmet dollar demand from investors, according to the International Monetary Fund.