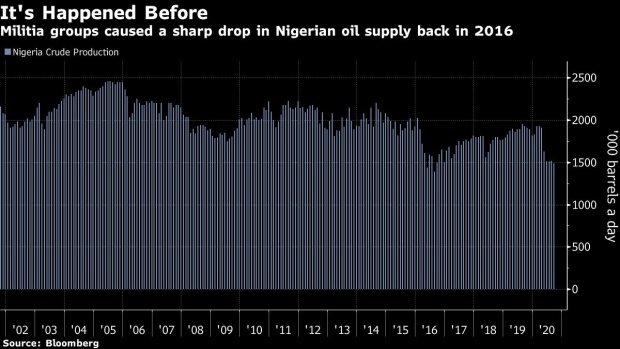 A wave of protests against police brutality have taken place in the past few weeks, triggering a deadly government crackdown in a nation that accounts for roughly 20% of Africa’s entire oil production. Exports, planned shipments and output of crude oil are continuing to run as normal, according to shipping data, traders and local officials.

Telltale signs of disruption to oil supplies would be a return to hostilities by militias in the oil-rich Niger River delta, or if the crisis degenerates into sectarian violence. A major strike by the nation’s key oil unions would potentially impact flows too.

These things haven’t happened yet. While the unions announced their support for the protesters on Oct. 19, they’ve not ordered a shut down of oil installations, according to a statement.

Back in 2016, myriad militia organizations emerged in Niger River delta, attacking oil facilities and causing production to plunge. Output did fall earlier this year, but that is because Nigeria is participating in coordinated curbs organized by the Organization of Petroleum Exporting Countries.

An group called Reformed Niger Delta Avengers, described by local newspaper ThisDay as a coalition of nine militant groups, did warn it could carry out attacks if the federal government didn’t meet the protesters’ demands. It’s not clear how powerful the RNDA is, and so far it has yet to act.

President Muhammadu Buhari, in a state broadcast late Thursday, appealed for peace, pledging his government will keep its “obligation to protect lives and properties.”

Millions of young Nigerians across the nation of more than 200 million people have poured onto the streets since Oct. 5 in protest against police brutality. That morphed into a catch-all for everything that ails the country, from corruption to bad governance. At least 56 people have died during the unrest. The oil industry has gotten through largely unscathed with most facilities far out to sea and beyond easy reach.