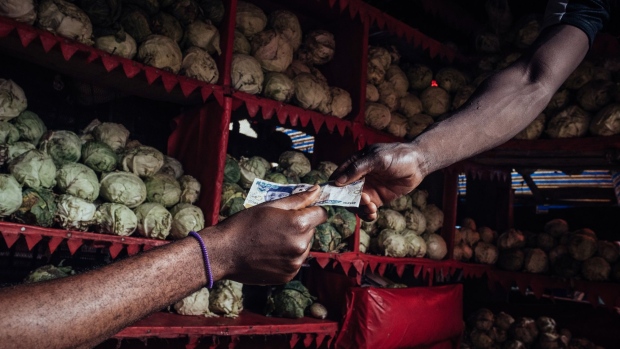 A customer hands a vendor a 500 Nigerian naira banknote for fresh produce on a stall at Utako Ultra Modern market in Abuja, Nigeria, on Wednesday, June 3, 2020. The government of Nigeria, whose revenue could be slashed by more than half this year due to the oil-price slump, finalized plans for a revised budget that keeps spending almost intact, and that will mean more borrowing. Photographer: KC Nwakalor/Bloomberg , Bloomberg

Low revenue collection and high recurrent costs have resulted in actual capital expenditure below two trillion naira ($4.88 billion) a year for a decade, Ben Akabueze, director-general of the Budget Office, said Tuesday in a virtual presentation.

“Hence, the investments required to bridge the infrastructure gap are way beyond the means available to the government,” Akabueze said. Recurrent spending, allocated towards salaries and running costs, has accounted for more than 75% of the public budget every year since 2011, he said.

Africa’s largest economy requires at least $3 trillion of spending over the next 30 years to close its infrastructure gap, Moody’s Investors Service said in November. The country’s tax revenue as a proportion of gross domestic product is one of the lowest globally, according to the International Monetary Fund.

Nigeria should amend its constitution to create six regions to replace the existing 36 states, which each have their own governments, Akabueze said. The country also needs to reduce the number of cabinet ministers to a maximum of 24 from more than 40 and cut federal ministries to fewer than 20 from the current 27, he said.

“No country can develop where a large part of its earnings is spent on administrative structures rather than on capital investment,” Akabueze said.