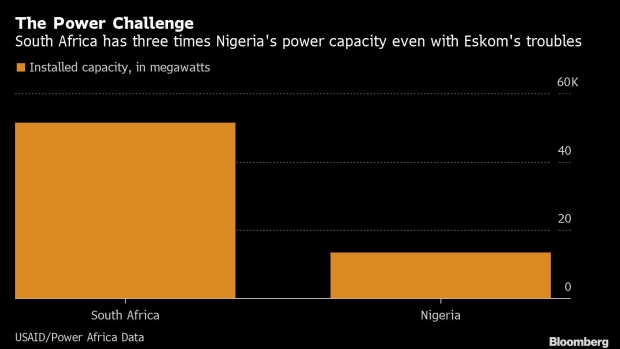 Nigeria plans to use a $3 billion loan it’s negotiating with the World Bank to tackle mounting debt in the power sector that risks the collapse of companies running the national grid.

“Distribution companies are not collecting enough revenue to pay their bills to the power-generation companies, who then can’t pay their bills to the gas companies supplying them,” Shubham Chaudhuri, the country director of the World Bank, said in an interview in Abuja, the capital. “The federal government has been stepping in to cover the bills for now, because otherwise the power will shut off.”

Africa’s most populous nation -- with almost 200 million people -- struggles to meet its electricity needs even after state-owned power assets were sold to private investors in 2013 in a bid to boost supply. Electricity production per capita is less than 15% of the average of emerging-market economies and less than 25% of the sub-Saharan Africa average, according to the International Monetary Fund.

Almost everyone in Nigeria depends on generators for regular electricity supply, adding drastically to costs for businesses.

President Muhammadu Buhari’s government has asked for World Bank assistance to turn around its power industry. Chaudhuri said some of the solutions may be new policies and regulations, along with additional financing.

“What we’re trying to do is to help the government figure out what combination of reforms and financing will be needed to get the power sector on track,” he said.

The World Bank is also encouraging the West African country to improve its business environment to create the space for businesses to thrive, create jobs, and address the country’s poverty. Nigeria has climbed 15 places to 131 in the latest ease-of-doing-business rankings.

Using Lagos and Kano, two of the country’s biggest cities, substantial improvements were found in the speed of registration of companies, streamlining of payments, quick issuance of construction and electricity-connection permits for new businesses.

“It’s a combination of action at the federal level and the state levels,” said Chaudhuri. “It’s a conversation between the federal, state governments, the private sector and international partners.”

To contact the reporter on this story: Dulue Mbachu in Abuja at dmbachu@bloomberg.net

To contact the editors responsible for this story: Paul Richardson at pmrichardson@bloomberg.net, Ana Monteiro, Chris Kay