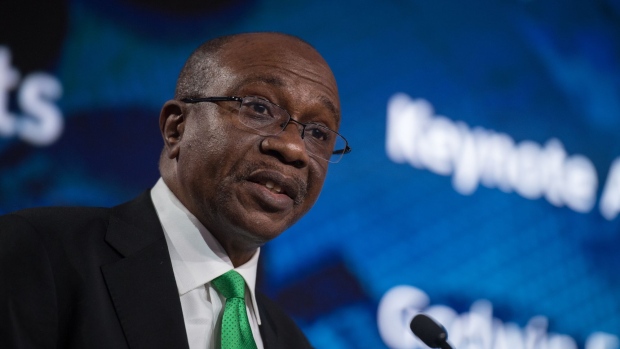 (Bloomberg) -- Nigeria, which has attracted just 840,000 users for its digital currency since October, is seeking to boost adoption of the e-naira almost 10-fold in the next 12 months by luring people without bank accounts.

The Central Bank of Nigeria is targeting 8 million users in the “second phase” of the digital currency’s expansion, central bank Governor Godwin Emefiele said Thursday in Abuja, the capital.

“Just like the naira, the e-naira is expected to be available to all Nigerians and will provide more possibilities to bring the unbanked into the digital economy,” Emefiele said during the finals of a central bank-sponsored hackathon to build products around the e-naira.

The steady depreciation of the naira has seen many residents of Africa’s most populous nation pivot toward cryptocurrencies, even though the central bank ordered commercial lenders to stop transactions or operations in digital tokens. While there are 270,000 active users of e-naira, as many as 33.4 million Nigerians have either owned or traded cryptocurrencies, according to a report by KuCoin, a Seychelles-based crypto exchange.

The adoption of stable coins like USDT is on the rise in the West African nation, according to Paxful, a peer-to-peer exchange. The average monthly trade volumes increased 10-fold to $25 million in June 2022. Trade volumes for the first half of 2022 are nearly $400 million compared to $760m for last year on Paxful alone.

While the e-naira is an exciting project, accelerating inflation and a weakening currency have deterred its adoption, said Keturah Ovio, chief executive officer of book-keeping startup Dukka. “To drive adoption, the central bank has to take initiatives to drive down inflation and improve trust in the local currency.”

Africa’s most-populous nation has shown more interest in cryptocurrencies than any other country since the digital assets began to decline in April, according to a study by price tracker CoinGecko.

Meanwhile, from Monday, people without bank accounts will be able to download and open an active e-naira wallet by using the unstructured supplementary service data, or USSD, and dialing *997 from their mobile phones, said Emefiele.

Only about 45% of adults in the nation with more than 200 million people have bank accounts, according to the World Bank. That compares with an average of 70% in the BRICS economies. The e-naira has attracted slightly over 200,000 transactions valued at 4 billion naira ($9.4 million), just a fraction of the 54 trillion naira through the Nigeria Instant Payment System between January and February 2022.

The expansion of access to the e-naira platform will further deepen its integration with the existing national payment infrastructure, Emefiele said. Both merchants and consumers with bank accounts will now be able to use the nation’s existing payment mechanism to transfer and receive e-naira.

“We don’t have a choice but to live with the fact that we are now in a digital economy,” Emefiele said. “The use of cash will dissipate to zero and the use of digital currency will increase to become part of our lives.”