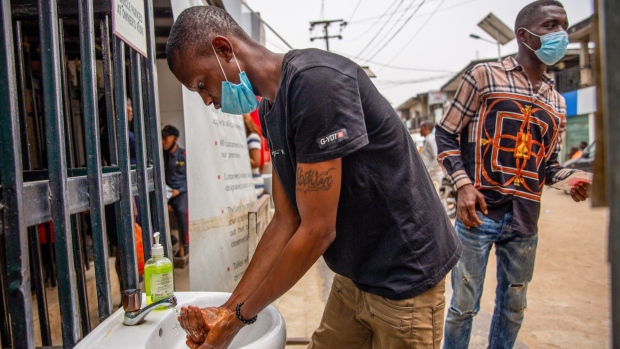 A shopper stops to wash his hands at the entrance to a market in Lagos, Nigeria, on Monday, March 29, 2021. Nigerians are having to contend with the highest inflation rate in four years, the second-highest unemployment rate on a list of 82 countries tracked by Bloomberg, and an economy that’s only just emerged from recession. , Bloomberg

(Bloomberg) -- Two southern Nigerian state governments instructed their populations to get inoculated against the coronavirus or be banned from religious services and public places, while federal authorities suggested they’re considering restrictions to tackle vaccine hesitancy.

Large gatherings, places of worship and banks will only be accessible to those with proof that they’ve received at least one Covid-19 shot from mid-September, Edo state governor Godwin Obaseki said last week. On Aug. 30, the leaders of neighboring Ondo declared that only the vaccinated can enter churches, mosques, hospitals, government offices and other public places after a two-week grace period. Nigeria comprises 36 states and the capital, Abuja.

Just 150,000 of the approximately 10 million residents of Edo and Ondo have had a vaccine so far, although the inoculation rate has recently picked up, with more than 60,000 shots issued on Aug. 30. Even if the two states can pin down adequate vaccines and distribution accelerates further, the measures will be highly disruptive.

A federal court has ordered Obaseki’s administration to put the curbs on hold while it considers an objection from an Edo resident, and adjourned the case until Sept. 10. Osaigbovo Iyoha, Obaseki’s chief of staff, said efforts to obtain and dispense vaccines “will be redoubled on all fronts.”

Dozens of people bearing placards with slogans such as “Say no to forceful vaccination,” and “We are not guinea pigs,” staged a march in Benin City, Edo’s capital, on Aug. 30.

Nigeria’s federal government aims to vaccinate the adult population of about 110 million over the next two years. So far just 8.7 million doses of two-shot vaccines have been delivered to the country, and fewer than 3 million citizens have had at least one shot.

As soon as shots “are made equitably available to all Nigerians, then we would need to have a frank discussion about justice, fairness and liberty that exist around vaccine hesitancy,” Faisal Shuaib, executive director of the National Primary Health Care Development Agency, said on Tuesday. If people choose to reject the shots, “then we have to apply the basic rule of law which stipulates that your human right stops where mine begins,” he said.

About 190,000 Covid-19 cases and 2,500 deaths have been confirmed in Nigeria, although the true figures are likely higher due to low testing rates. The West African nation is currently experiencing its third wave of infections, which have accelerated since the delta variant was detected in July.